Gupta, Vaghela, and Gupta: Topography of the location of mental foramen in dried edentulous human mandible and its clinical implication

Introduction: The mental foramen is an oval or round opening on external surface of mandible and transmits mental nerve and vessels. Mostly located at apex of second mandibular premolar or between the apices of premolars.

Materials and Methods: The study was commenced on 60 dried edentulous mandibles with the aim to determine location of mental foramen(MF) with reference to surrounding anatomical landmarks. By measuring its distance from midline (symphysis menti), posterior border of ramus of mandible, lower border of mandible. Length of lower border (Base) of mandible was also measured.

Conclusions: The MF plays a very important role in treatment planning and its location needs to be considered prior to placement of dental-implants, regional anesthesia, osteotomy-surgeries and during complete denture-fabrication in order to avoid MN injury and related complications.

The mandible bone is the strongest and largest bone of the human face that develops from the first pharyngeal arch. Mandible bone is a U- shaped bone consists of horizontal part body and vertical part ramus. Horizontal part has alveolar process that supports mandibular teeth. Mental foramen is present on the outer surface of mandible inferior to second premolar teeth through which mental nerve and mental vessels emerge.1

Mental foramen is an important anatomical landmark. Knowledge of the orientation and position of it facilitate local anesthetic, surgical and other invasive procedures for oral and maxillofacial surgeries.3

During radiographic examination the foramen may be misdiagnosed as a radiolucent lesion in the apical area of the mandibular premolar teeth. So identification of accurate anatomical position of mental foramen is very important in periodontal surgery especially during flap surgery in lower teeth, retrograde amalgam fillings, apical curettage of mandibular premolars.

Present study 60 dried edentulous mandibles of unknown sex were selected for the study. Damaged and broken and congenitally malformed mandible were excluded. Shape of mental foramina were macroscopically observed and noted. Various measurements were taken on both side using digital vernier caliper. 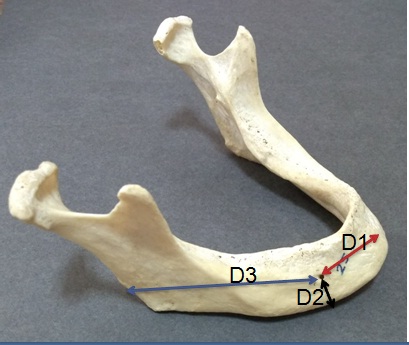 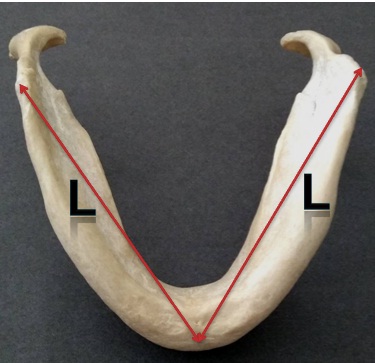 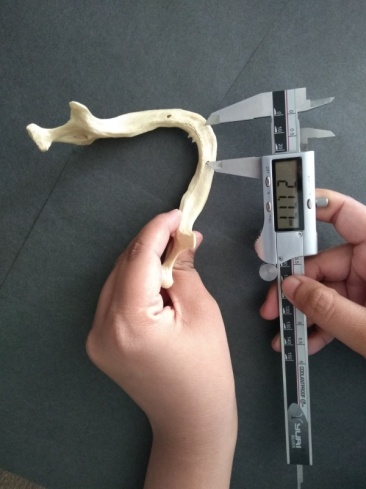 Out of 60 mandible 18 mental foramina on right and 18 on left side were oval in shape rest were round. Most common shape of mental foramen was round (70%).

Correlation between distance of MF from symphysis menti and length of mandible and its analysis shows significant positive correlation. 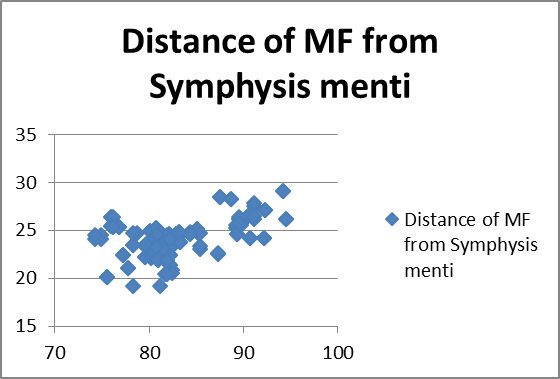 The mental foramen usually found on the anterolateral surface of the mandible which is a single circular or oval opening lies 13-15 mm superior to the inferior border of the body of mandible.4 In most cases mental foramen is the interval between the two premolars and the apex of second premolar is the another most common site.5 In our study, the distance from inferior margin of mental foramen and the lower border of mandible is 12.28 mm on right side and 12.49 mm on left side in edentulous human mandibles comparatively less than the study done by Srinivas Moogala et al.6 The study done in Korean population by Chung et al.7 reported that the average distance between the inferior border of the mandible and the center of mental foramen was 15.5 mm in males and 14.0 mm in females.

Comparison of measurements with previous studies

In edentulous human mandible location of mental foramina will depend upon the degree of bone resorption. The position of mental foramen moves towards the upper border of mandible and in severe cases alveolar nerves and vessels exposed out of the bone and it lies just deep to the oral mucosa that sometimes causes pain to who wears denture.9

In our study, the distance from most anterior margin of mental foramen to posterior border of ramus of the mandible (D3) on right side it is 64.44 ± 5.23 mm and left side it is 64.26 ± 4.58 mm which found less than the studies conducted by Srinivas Moogala et al.6 and Shankar et al.14

In study done by Mraiwa et al.15 showed that in dentate mandibles the MF was commonly located at a half way distance from the alveolar crest to the inferior border of mandible. The alveolar bone resorption after teeth loss, transposes the MF closer to the alveolar crest and in extreme situations the foramen might be found on the crest of the alveolar ridge. Study done by Srinivas Moogala et al.6 conclude that in dentate and edentulous human mandibles the distance from symphysis menti to the most anterior margin of mental foramen nearly same. While study by Qiufei Xie et al16 summarizes no significant reduction in the average distance between the lower most point of the mandibular canal and the lower border of mandible in the edentulous human.

In our study, we found significant positive correlation in distance between mental foramen and symphysis menti, and between length of mandible. Obtained data can be use to locate the vertical plane of possible location of mental foramen.

In clinics dental surgeons should be aware of the possibility of variation found in abnormal location of MF in the mental area in order to prevent the injury to the MN and adjacent blood vessels and the resulting postoperative sensory complication of the teeth and surrounding skin and mucosa during various dental surgery like genioplasty, vestibuloplasty and dental implantation. To have a safety zone of 2mm must be there between coronal aspect of nerve and implant to avoid mental nerve injury in surgery nearby mental foramina.

Limitation of the Study

Small sample size and gender differences were not studied.