Evaluation of biparietal diameter and femur length by ultrasonography method, its correlation with fetal gestational age a comparative study in Chhattisgarh state of India

Materials and Methods: A total of 380 pregnant females were enrolled for the study. They were between the 20 weeks to 38 weeks of gestation with their age ranging from 18-35 years.

Results: In the present study we observed a total of 158 cases in 2nd trimester i.e. ranging from 20 to 27 weeks and 220 cases were in 3rd trimester of pregnancy. Mean of BPD and FL observed was 73.1 and 56.2 respectively. The standard deviation and standard error of mean for biparietal diameter and femur length were 12.8, 11.6 and 0.63, 0.57 respectively.

Conclusion: All parameters of present study are found to be highly correlated with gestational age. (r=, 0.987, 0.980 for, FL and BPD respectively).

Gestation is the period between conception and birth of a baby, during which the fetus grows and develops inside the mother’s uterus. Gestational age is the time measured from the first day of the woman’s last menstrual cycle to the current date and is measured in weeks. A pregnancy of normal gestation is approximately 40 weeks, with a normal range of 38 to 42 weeks. For estimation of gestational age and to evaluate the fetal development, study of fetal biometry is most commonly used. Gestational sac diameter and volume and crown rump length measurements are used to determine the gestational age. Biparietal diameter, Head circumference, Abdominal circumference and Femur length, Fetal biometry and the Fetal kidney length are most commonly used in second and third trimester of pregnancy.1

In this background we conducted the present study at Pandit Jawaharlal Nehru Medical College and Dr. B.R. Ambedkar Hospital, Raipur Chhattisgarh to evaluate and compare the gestational age and femur length and biparietal diameter in the population of Chhattisgarh state of India.

A total of 380 pregnant females were enrolled for the study. They were between the 20 weeks to 38 weeks of gestation with their age ranging from 18-35 years. Uncomplicated pregnant women having single live, normal fetus and only singleton fetus with complete visualization of at least one kidney were included in the study. The patients who were sure of the dates of their last menstrual period with regular menstrual cycle were also included in the study. 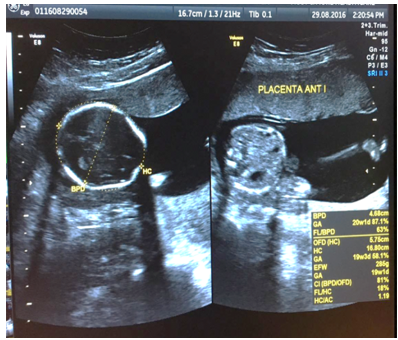 The transverse section of the fetal abdomen was found and the transducer was slide caudally until the iliac bones were visualized. At this point, a cross section of the femur was usually seen. By keeping this bright echo from the femur in view, the transducer was rotated until the full length of the femur was obtained. The soft tissue was visible beyond both the ends of the thigh at any point. The measurement of the femur was made from the centre of the U shape at each end of the bone. This represents the length of the metaphysis. At least 3 readings were taken and the average was taken as femur length. (Figure 2) 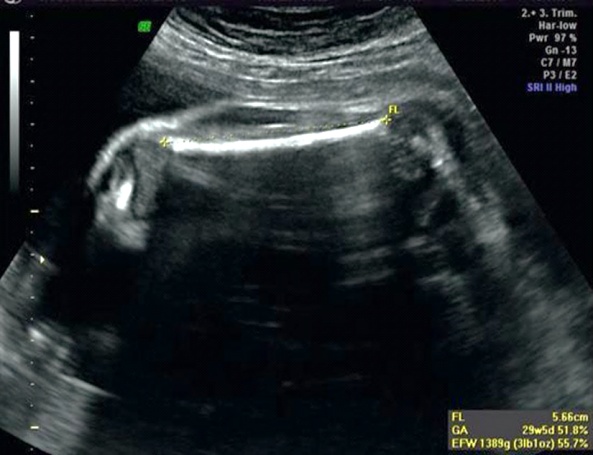 Historically, BPD was the first parameter used to assess the gestational age of the fetus. Its accuracy was found to be maximal between 12 to 20 weeks in various studies. Correlation between BPD and gestational age at 20-24 weeks was r= 0.987 and reduced to r=0.947 at 35-38 weeks of pregnancy.

To assess the accuracy of method for determination of gestational age, we examined total of 380 pregnant females between 18-35 years of age. The parity included in the study was from 1st – 3rd number of pregnancy. Hence in our study the kidney length estimation has been done after 19 weeks as it is more technically feasible. Multiple gestations were excluded from the present study, as growth is not uniform for both the fetus. Maternal diseases like gestational hypertension, diabetes, IUGR diagnosed in the course of the study were also not included. In the past, studies were done to rule out anomalies of the urinary tract by measuring the kidney length. Further it was also found useful for gestational age assessment in normal cases. In the present study the maximum number of cases out of total 380 normal pregnant female, were found in the maternal age group between 24 -26 years i.e. 116 cases, and minimum cases were in the age group of 33 – 35 years i.e. 17 cases. In our study 197 cases belongs to primipara i.e. maximum number of cases out of 380 cases, and minimum number of cases i.e. 32 cases were found in 3rd parity. This study showed the maximum number of cases in primipara because of fact that, the awareness for the sonographic examination is more in primipara to confirm the intrauterine pregnancy, secondly to avoid birth complications and to detect fetal malformations.

In present study, it was observed that calculation by regression model relationship between Femur length (r2= 0.975) and Biparietal diameter (r2= 0.961). The coefficient of determination observed in our study was higher as compared to J.J. Kansaria et al. (r2=, 94.84, 90.91 for, FL and BPD respectively).

A number of reasons could explain these differences. These include number of sonologists, type of study (longitudinal vs. cross-sectional), quality of ultrasonography machine, characteristics of subjects and observer bias (non-blind vs. blind study).

In a study on 58 pregnant women, Konje et al. showed that there was a significant correlation between gestational age and kidney length. They concluded that fetal kidney length could be used reliably for estimation of gestational age. Results of the present study were in good agreement with that study.

It can be concluded from the study that observed Standard Error of, FL, BPD is, 0.57, 0.63 respectively. All parameters of present study are found to be highly correlated with gestational age. (r=, 0.987, 0.980 for, FL and BPD respectively). Correlation between Biparietal Diameter (BPD) and Gestational age is consequently decreases according to gestation age from 20 weeks to 38 weeks. Correlation is maximum between 20 to 24 i.e. 0.979. All the fetal biometric indices have a P value < 0.05 and these are statistically significant. In early weeks of gestation based on the mean and standard deviation, it can be inferred that all parameters are reliable for gestational age assessment. At term however, FL closely accurate for dating pregnancy.