Kumar, Kumar, Ranjan Sinha, Akhtar, and Kumar: Morphometric study of sacrum and its clinical implications in population in Bihar

Background: The sacrum is a large triangular bone formed by fusion of five sacral vertebrae and wedged between two hip bones. Dimension of sacrum varies from region to region therefore morphometric study of sacrum in population of Bihar is important for proper fixation during orthopedic procedure in trauma patients.

Objective: The objectives of this study was to evaluate the morphometric parameters of sacrum so that a data can be generated from local population.

Conclusion: Morphometric study of sacrum in population of Bihar is important because dimension of sacrum varies from region to region and this is important for proper fixation during orthopedic procedure in trauma patients.

Sacrum is a large triangular bone formed by the fusion of five sacral vertebrae. In an articulated pelvis it forms the posterior boundary of the pelvic cavity. It is placed obliquely like a wedge in between two hip bones. It forms an angle with rest of the vertebral column known as the sacro-vertebral angle, which is varies between 128-160 degree with an average of 140 degree in male and 137 degree in the female. The sacrum consist of a base, an apex and the four surfaces, pelvic, dorsal, and a pair of lateral. The sacrum is divided by the rows of foramina into a median portion traversed by the fusion of the transverse by sacral canal and a pair of lateral masses formed by the fusion of the transverse processes posteriorly with the costal elements anteriorly. The base is directed upwards and forwards and consist of an articular part and a non-articular part, the articular part is formed by the upper surface of the body of first sacral vertebra. The anterior margin of the articular part of the base projecting forwards forming a prominent margin known as the sacral promontory. The non-articular part of the base projects lateral wards on either side of the articular part, known as ala of sacrum. The ala of sacrum forms the upper surface of the lateral mass and is formed by the fusion of transverse process and costal elements. The vertebral foramen is large and triangular. It lies behind the body of S1 vertebra and leads into the sacral canal. The pedicles are short and directed backwards and laterally. The laminae are directed downwards, backwards and medially. Where the meet, the spinous process is represented by spinous tubercle. The pelvic surface is concave from above downwards and also from side to side. Due to the oblique position of the sacrum its pelvic surface is directed downward and forwards. There are four pairs of the pelvic sacral foramina communicate through intervertebral foramina with sacral canal. There are four transverse ridge which indicates the line of fusion between sacral vertebrae. The bar of bone intervening between two sacral foramina of the same side represents the costal elements. Lateral to the anterior sacral foramina on each side, costal elements unite with one another to form the lateral mass. The dorsal surface of sacrum is rough, irregular and convex and is directed backward and upwards. In the median plane it is marked by median sacral crest with 3-4 spinous tubercles representing the fused spines of the upper four sacral vertebrae. Below the 4th spinous tubercle there is an inverted U shaped gape called sacral hiatus. The articular surface formed by the costal elements, articulate with the articular surface of the hip bone. Apex of the sacrum is formed by the inferior surface of the body of S5 vertebra. It bears an oval facet for coccyx. It has long been customary among anatomists, anthropologists and forensic experts to identify sex of skeletal material by metric and non-metric observations. Sacrum is an important bone for this purpose, both as an individual bone and a part of pelvis. It has an applied importance in determining the sex with the help of measurements carried out upon it. Metrical study of sacrum for the identification of sex have been carried out by various authors.1, 2, 3

The present study consist of 110 adult sacra of known sex (62 male and 48 female). These were collected from department of Anatomy, Indira Gandhi Institute of Medical Sciences, Patna, Bihar and also from other medical college from August 2018 to September 2019. The sacra were measured with a sliding digital caliper, flexible steel measuring tape, scale and dividers.

The following measurement were taken:-

By using above measurements the following indices were calculated:- 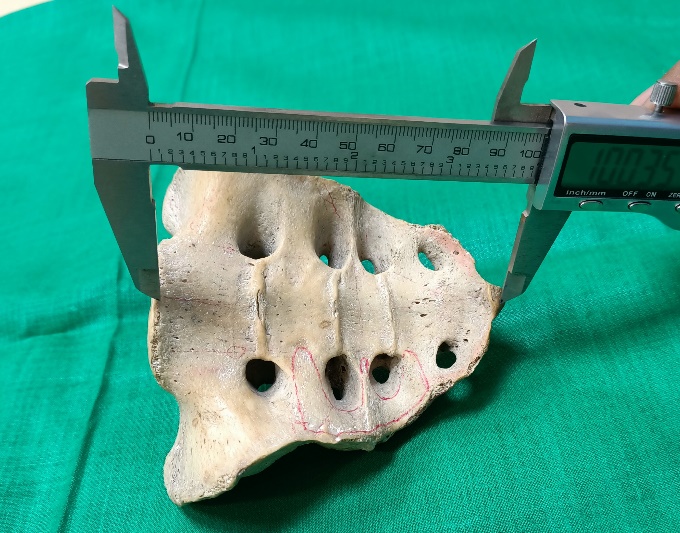 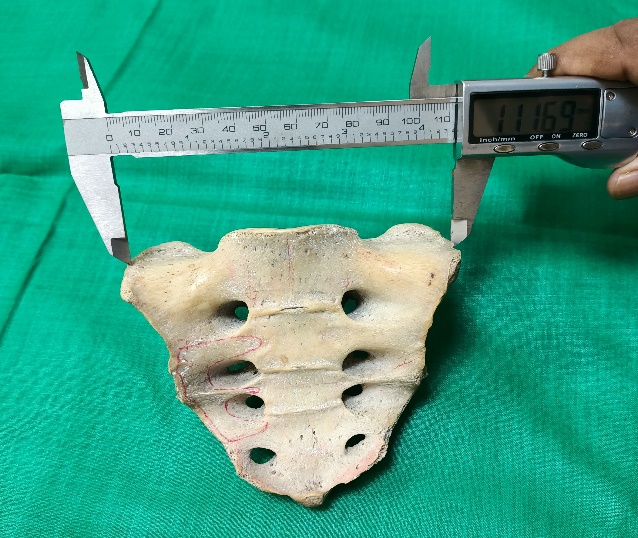 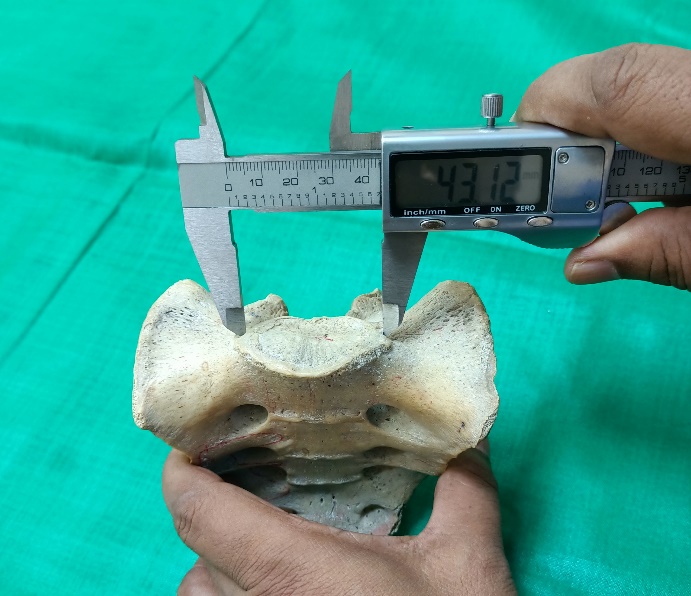 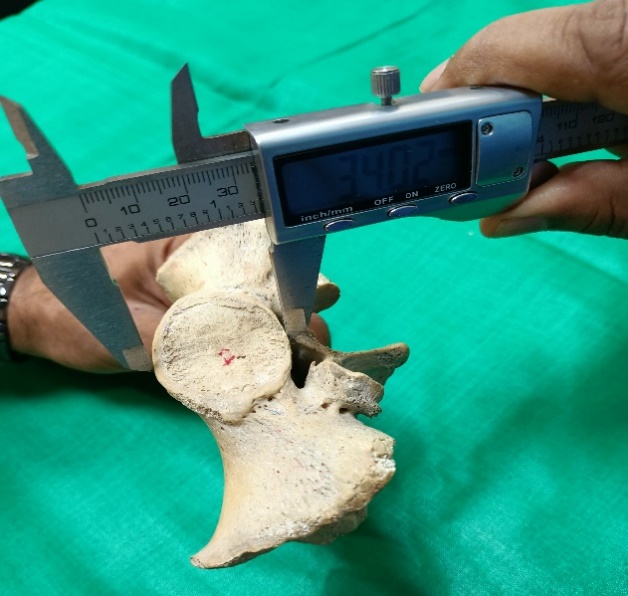 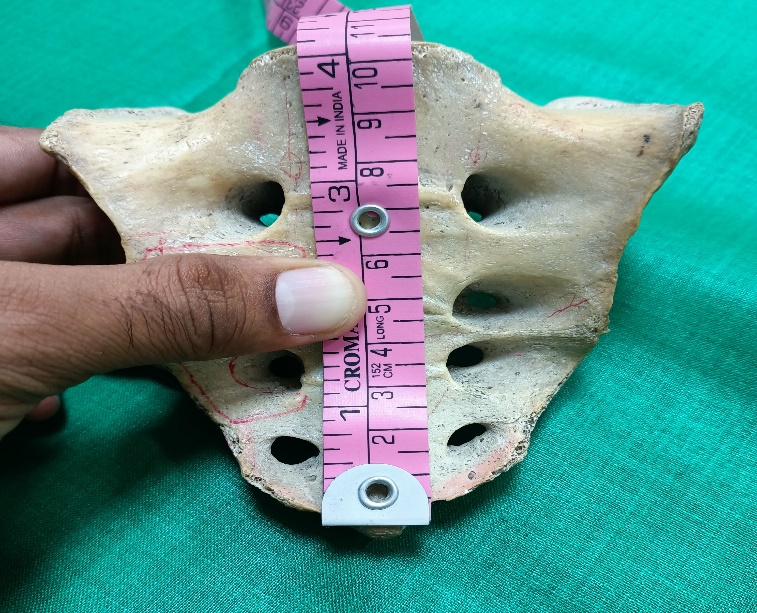 Dimension of sacrum varies from region to region therefore morphometric study of sacrum in population of Bihar is important for proper fixation during orthopedic procedure in trauma patients.