An insight of association of insulin resistance with polycystic ovary syndrome

Aims: This review intends to unveil the molecular basis of the genetic polymorphism of IR and its correlation with PCOS. It also highlights the existing methods of IR estimation.

Material and Methods: Searching of different articles using keywords including PCOS, IR, and polymorphism in various databases was performed to illustrate the review article.

Conclusion: POCS, and IR are complex and multifactorial conditions in terms of the contributing factors, their interactions, and expressivity. Further studies on diversified genotype responses to environmental and ethnic variances are required for precise understanding.

Key Messages: Insulin resistance (IR) and polycystic ovary syndrome (PCOS) are intricately interacted conditions that abnormally alter functions from genetic to organ system level. Complex gene-environment interactions make it difficult to understand the etiology and manifestation, and so diagnosis and management approaches of the heterogeneous pathophysiology are not foolproof. Further studies on genetic susceptibility related to ethnic distribution are essential for the implementation of personalized treatment of IR and PCOS.

Polycystic ovary syndrome (PCOS), an emerging endocrinopathy, affects 5-10% of reproductive-aged women with unspecified etiology.1, 2, 3 Menstrual complications, hyperandrogenism, polycystic ovaries, excessive luteinized theca cells in ovarian stroma (hyperthecosis), and cutaneous manifestation like acanthosis nigricans indicate dysregulation of neuroendocrine axes in PCOS.1, 4, 5, 6, 7 Interactions of insulin resistance (IR) with hyperandrogenism and many confounding factors altered the activities of the hypothalamic-pituitary-adrenal axis, sympathoadrenal medullary system, and hypothalamic-pituitary-gonadal axis in PCOS.1, 4, 5, 6, 7 In this review the possible genetic and molecular basis of IR and its relationship with PCOS were illustrated in an approach to fulfill the missing links.

Terms including “Insulin resistance, PCOS, single nucleotide polymorphism (SNP), molecular biology and genetics of IR” were used in databases of PubMed and PMC to search the articles (timeline: 1947-2021) for writing the review article.

The metabolic effect of insulin is mediated by binding it with the α-subunit of heterotetrameric insulin receptors. It activates the tyrosine kinase of the receptor’s β-subunit triggering the phosphorylation of insulin receptor substrate (IRS) proteins and activation of phosphatidylinositol 3-kinase (PI3K).8 Protein kinase B (PKB) or Akt, a downstream molecule of the PI3K pathway, regulates insulin activities including glycogenesis and inhibition of glucose synthesis in the liver.8 In basal condition glucose transporter type 4 (GLUT4) often away from the cell membrane and resides in the endosomal system and “GLUT4 storage vesicles (GSVs)”.9 Insulin translocates the GLUT4 from the GSV pool to the cell membrane for glucose import into muscle and adipose tissue (Figure 1).8, 9 Studies suggest that PKB potentially phosphorylates AS160, a Rab-GAP (GTPase activating protein), and PtdIns3P 5-kinase (PIKfyve) which regulates insulin-stimulated GLUT-4 trafficking.9 PI3K can also regulate gluconeogenesis. Forehead box protein-o-1 (Foxo1) enters into the nucleus and activates transcription of few rate-limiting enzymes of gluconeogenesis like phosphoenolpyruvate carboxykinase (PEPCK) and glucose-6-phosphatase (G6Pase).8, 10, 11, 12, 13, 14 PKB (Akt2) is responsible for phosphorylation of Foxo1 to restrict gluconeogenesis.8, 10, 11, 12, 13, 14 Mutation of PKB (Akt2) results in a reduction of phosphorylation of Foxo1 protein leading to enhancement of transcription rate of PEPCK and G6Pase as well as gluconeogenesis in hepatocyte.8, 10, 11, 12, 13, 14 This impairment is a key indicator of dysregulation of insulin action leading to IR, hyperglycemia, and type 2 diabetes mellitus (T2DM).8, 10, 11, 12, 13, 14 Studies suggest that IRS-1 knockout mice may have a mild form of IR due to the compensatory behavior of pancreatic β cells. On the contrary null IRS-2 shows IR with impairment of pancreatic β cell compensation. The variation in IR expressivity indicates the diversified activity of IRS-1 and IRS-2 on the β cell mass and functionality.8, 15 Intracellular serine kinases cause serine phosphorylation in IRS-1 that can lead to a decrement in the interaction of insulin receptor/IRS-1 and/or IRS-1/ PI3K and increment in IRS-1 dissociation.8 This deregulation is a key feature of IR and can be propagated in an inherited manner.8 Studies represent that adipokines like tumour-necrosis-factor (TNF) and circulating free fatty acids (FFA) can stimulate serine phosphorylation in IRS-1 leading to impairment in signal transduction of insulin. 8 TNF-α can activate stress-induced enzymes, a c-Jun-NH2-terminal kinase that also stimulates the phosphorylation phenomenon. 8, 16 Class 1a of PI3K consists of a more regulatory subunit (p85) and a less catalytic subunit (p110) that leads to the formation of the heterodimer (p85- p110) and free p85 monomer. Imbalance in these subunits of PI3K may lead to IR by negatively affecting the cell signaling cascade.8, 17 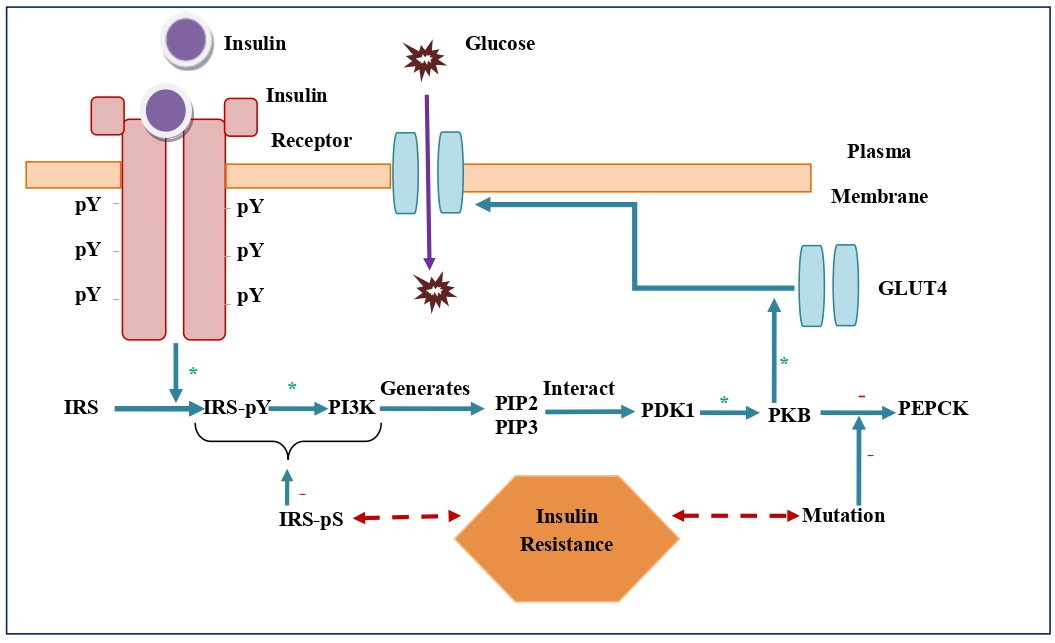 Intramyocellular and intrahepatic lipid accumulation are associated with a reduction in mitochondrial function like oxidative phosphorylation and electron transport chain (ETC).18 Decrement of mitochondrial density and activity are indicators of IR and T2DM.18, 19 Catabolism of oversupplied nutrients provides enhanced electron supply in ETC that induces proton gradient across the mitochondrial inner membrane.18 Failure in the coupling of this increased proton gradient and ATP synthesis leads to the generation of excess reactive oxygen species (ROS) resulting in oxidative stress.18 ROS as well as oxidative stress can damage various biomolecules including nuclear and mitochondrial DNA, lipid, and amino acids and cause dysfunctioning in signal transduction of insulin along with IR.18, 19 The exact mechanism behind the interaction between mitochondria and IR is still unclear. Emerging studies on skeletal muscle demonstrate that mitochondrial dynamics along with immunoreactivity and insulin sensitivity are interconnected with diet.18 Proper dietary patterns can reduce mitochondrial dysfunction and regain oxidative capacity.18, 20

IR along with altered fat distribution and hyperinsulinemia are major etiological factors of T2DM, dyslipidemia, cardiovascular disease, and PCOS.21, 22, 23, 24, 25 There are several proposed methods to estimate IR and sensitivity for clinical, epidemiological, and research purposes (Table 1).23, 26, 27, 28 Estimation of insulin sensitivity depends on two methods — (1) calculation based on fasting plasma concentration of glucose, insulin, and triglycerides and (2) calculated by using plasma concentration of glucose and insulin involving oral glucose tolerance test (OGTT).23

Possible pathways of role of insulin in PCOS

PCOS and IR both are genetically regulated and the prevalence of IR with or without PCOS can be found in the first-degree relatives of women with PCOS.29, 52 This phenomenon indicates crosstalk between PCOS, and genes of insulin signaling pathways that regulate the interaction of insulin with INSR and are associated with other signaling cascades which participate in the regulation of metabolism and cell proliferation.29, 53 The twisting and meshing of different components of insulin signaling and PCOS are not clear. Analysis of genetic variation involving single nucleotide polymorphism (SNP) study is a cardinal approach to understand the association between PCOS and insulin signaling. IR polymorphism studies of the PCOS population were illustrated in (Table 2). 29, 30, 31, 32, 33, 34, 54, 35, 36, 37, 38, 39 Genome-wide association study (GWAS) along with genetic polymorphism study are implicated to understand the genetic background in association with epigenetic factors, ethnicity, and lifestyle alternations of disease and syndrome. Goodarzi et al. performed a study on components of an insulin signaling pathway to find out its interaction with PCOS where genotyping of INSR and 27 genes coding for different pathways including PI3K were incorporated.29 In their study genotyping of 11 genes controlling glycogen synthase kinase 3β reflected that INSR and IRS-2 are key factors of PCOS.29 Another study of a meta-analysis involving 889 cases and 1303 controls, and 795 cases and 576 controls was performed where the results of the analysis suggest that IRS-1 Gly972Arg polymorphism is a key component of PCOS development with enhanced insulin level.53 This outcome also indicates the association between lowering of PI3K activity with impairment of insulin-stimulated signaling.53

PCOS is intertwined with various pathophysiological conditions and IR might be the most important of them. Disruption in insulin action by different means such as pancreatic deregulation and declination in insulin signaling associates and/or induces the onset and progression of PCOS or vice versa. Females of the Asian population reported a higher prevalence of central adiposity that could be a silent contributor to PCOS and they are prone to fall under cardiometabolic threat in post-reproductive life. Rapidly changing lifestyle patterns, diet, and increasing exposure to stress promote to worsen the situation, and the heterogenic disorders like PCOS 'tends' to rise. Considering these facts, it is essential to pursue further studies combining all the possible associated areas of a particular ethnic population for a better understanding of the divergent nature of PCOS. To apprehend the causes and progression of PCOS, the genetic predispositions and their contribution in response to epigenetic factors, and differential manifestation are needed to be evaluated in a precise and individualistic manner.

Department of Science and Technology, Biotechnology, Government of West-Bengal.

This review article is based on scientific research and reviews conducted on the molecular basis of insulin resistance and its association with polycystic ovary syndrome (PCOS). Financial assistance provided by the Department of Science and Technology, Biotechnology, Government of West-Bengal for carrying out the research work on polymorphism study of PCOS based on which the present review article was written and appreciated. The authors take full responsibility for the content of this article.

A Dunaif Insuin resistance and the polycystic ovary syndrome: mechanism and implications for pathogenesisEndocr Rev1997186774800

RR Kierland Acanthosis nigricans; an analysis of data in 22 cases and a study of its frequency in necropsy materialJ Invest Dermatol194796299305

BR Basu The crosstalk between dietary constituents and immunity: a preventive approach to fight against viral disease like COVID-19J Nutr Food Sci Forecast20203119