Subbaramaiah: A case report of an unfurled appendix - embryological perspective

A case report of an unfurled appendix - embryological perspective

Appendicitis is a very common clinical condition requiring immediate attention. Long appendix is a frequent reason for inflammation. Very often the size and position of the appendix varies. The differential development of the caecum is responsible for the different positions of the appendix. Adequate knowledge about the presence of such unusual variations is a must for clinical surgeons. We are reporting one of the longest appendices seen during routine cadaveric dissection in south India which was just over 20 cm in length with the embryological basis.

The appendix is a tubular diverticulum arising from the caecum. It is lined with colonic epithelium with interspersed submucosal lymphoid follicles. Its function is unknown, although its lymphatic tissue and secretion of immunoglobulins suggest that it may play a specialized role in the immune system.1 The length and position of the appendix can vary considerably which many a time poses a diagnostic dilemma especially important as appendicitis is an acute emergency to be treated at the earliest. The longest reported appendix removed from a living person has been 26 cm.2 We are reporting one of the longest appendices removed at cadaveric dissection in south India which was just over 20 cm in length.

During the routine dissection of abdominal region in an elderly male cadaver for undergraduate medical students at Kempegowda Institute of Medical sciences, an unusually long appendix was observed in the paracolic position measuring 21.1cm long and 0.4cm in breadth. The appendix was straight from base to tip and it extended upwards along the right posterior side of the caecum. The tip was round and felt clearly with no kinking. The tip gave attachment to a fibrous band. The band was covered by peritoneum, measured about 24cm and finally blended with the mesentery reaching up to the sub hepatic region. The caecum was present in the right iliac fossa and ileocaecal orifice appeared normal. The appendicular orifice was narrow measuring about 0.3cm.The artery to the appendix arose from regular ileocaecal artery which extended to three fourths of the length of the appendix. The band however seemed to derive its supply from a branch arising from ascending branch of right colic artery. There were no signs of any adhesions in the abdomen. 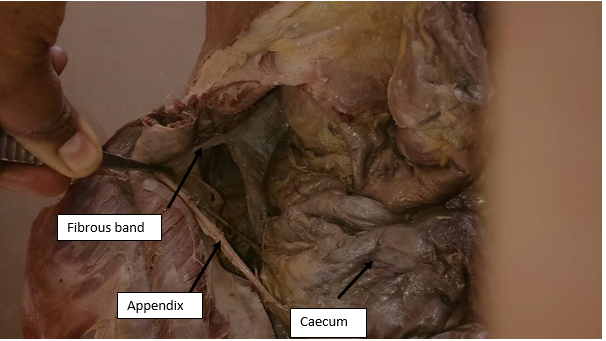 The appendix is tubular structure containing mucosa, sub mucosa, muscular layer and serosa; it is present just below ileocaecal junction in primates apes and wombats. It resembles a worm because of its mesenteric attachment which falls short of its tip thus creating a kinked appearance.3

In lower animals it is known to help in the digestion of cellulose but its exact role in humans is not clear. It is believed to be a vestigial organ while some classify it as a lymphoid organ. It may serve as a nidus for the gut friendly bacteria.4

The appendix is usually 6-9 cm long but the length has been reported to range from 1 cm to 20 cm in length. However some unusually long appendices have been reported.5 The longest appendix reported in the literature measured 26 cm removed from 72 year old during an autopsy in Croatia in 2006 (Guinness World Records) long appendices which are most often folded or coiled are generally associated with inflammatory symptoms ranging from periumbilical pain, nausea, migration of pain to the right lower quadrant, and later vomiting with fever.6

Most common position of the appendix is retrocecal followed by pelvic, paracecal, subcecal, pre ileal and post ileal. The differential development of the caecum is responsible for the different positions of the appendix.5 Arrested caecal descent occurs where the caecum lies in the sub hepatic position but does not descend to the right iliac fossa. As a result of that, an inflammation of a subhepatic appendix can mimic cholecystitis, and perforation of a subhepatic appendix can mimic liver abscess.7 Hicham had reported a 23 cm long appendix removed after appendectomy which after fixation in formalin measured 20cm.8 Kosuke Endo et al. reports a case of torsion of appendix in child. Possible causes of primary torsion include an abnormal mesentery, such as that with a narrow base, absence of a zygotic fold that usually fix the appendix or inflammation.9

Ethnic and geographical variations have been reported regarding the length and position of the appendix.10 Bodetti had reported a case of 28cm long appendix dissected in a cadaver in North India. This is a case report of an unusually long appendix found during routine dissection in South India. It was straight and not coiled as was the case in most others. The third interesting finding was that it was attached to a fibrous band covered by peritoneum which reached up to the sub hepatic region with caecum in the normal right iliac position. Usually sub hepatic appendices are associated with non-descent or malrotation of the caecum.5 There were no signs of any adhesions ruling out the possibility of secondary attachment of the appendix to the sub hepatic region. Such a case has not been reported so far.

The appendix is supplied by appendicular artery (artery of Sheshachalan) arising from the division of the ileocaecal artery.5 In the present case most of the length of the appendix derived its arterial supply from the above mentioned artery however the tip and the band associated had a separate branch arising from right colic artery.

Appendicitis is a very common clinical condition requiring immediate attention and long appendix is a frequent reason for inflammation and torsion. Thus adequate knowledge about the presence of such unusual variations is a must for clinical surgeons.