Kaur and Batra: Study of sympathetic and parasympathetic control of haemodynamics in mid pregnancy by cardiac autonomic neuropathy analyzer

Background: Pregnancy is associated with substantial changes in cardiovascular system. The action of autonomic nervous system is essential for circulatory adaptations in pregnancy and nourishing growing fetus.

Aims and Objective: The study was conducted to assess the significance of autonomic function tests amongst women of mid pregnancy and non pregnant women.

Materials and Methods: A comparative study was carried out amongst pregnant and non pregnant women in Department of Physiology. A total of 60 women (30 pregnant as study group and 30 non pregnant healthy women as control group) aged between 18- 30 years were included in study.

Conclusions: Our study showed role of parasympathetic activity in controlling haemodynamics in mid pregnancy and it may help to return the arterial pressure to non pregnant level by causing haemodilution, although when the increase in activity is excessive, hypertension may ensue.

Pregnancy is associated with substantial changes in cardiovascular system.1 The action of autonomic nervous system is essential for circulatory adaptations in pregnancy and nourishing growing fetus. The autonomic nervous system is divided anatomically and functionally into two distinct system i.e. the sympathetic and parasympathetic in first half of pregnancy systemic vascular resistance and blood pressure decreases, during last trimester systemic vascular resistance increases.2 A well controlled interaction between sympathetic and parasympathetic system is necessary for adapting the cardiovascular system to various haemodynamic needs not only under pathophysiological conditions like hemorrhage and shock, but also in physiological states such as pregnancy.3

During pregnancy there is an increase in blood volume, heart rate and cardiac output while peripheral resistance and resting blood pressure decreases.4 It might be anticipated that baroreflex function would be decreased in pregnancy because the physiological hypervolemia of pregnancy would be expected to dampen large changes in blood pressure induced by a given stimulus.5 Systemic vascular resistance is also decreased in response to haemodynamic changes. Arterial blood pressure shows a progressive fall in first and middle trimester.6 As gestational age increases further aortocaval compression caused by enlarging gravid uterus further compromises venous return and cardiac output leading to shift in sympathetic nervous system activity towards an even higher sympathetic and lower vagal modulation in third trimester of pregnancy.1

Aortocaval compression is the main suggested factor responsible for this change. Failure of these adaptations may result in pregnancy related complications such as pregnancy induced hypertension, preeclampsia and eclampsia.2 Autonomic nervous control can be non- invasively studied with the cardiovascular reflex tests, such as the orthostatic test, the isometric handgrip test and by measuring heart rate variability. Common to the tests is that they all disturb the circulatory system. By examining the recovery of the cardiovascular system, information may be obtained on the autonomic nervous control of the haemodynamics.7 A combination of tests is needed to elucidate overall autonomic nervous control.8 This study was undertaken to investigate the changes in autonomic nervous system activity and its control over haemodynamics in mid pregnancy in pregnant females as compared with non pregnant females.

The current study is planned to learn how to assess the significance of autonomic function tests amongst women of mid pregnancy and non pregnant women.

A comparative study was carried out amongst pregnant and non pregnant women in Department of Physiology. A total of 60 women (30 pregnant as study group and 30 non pregnant healthy women as control group) aged between 18-30 years were included in study after approval of protocol by institutional ethical committee.

Canwin is the state-of-the-art window based computer having cardiac autonomic neuropathy (CAN) analysis system with interpretation. It has an extensive data base to keep track of subject’s history and for archive test retrieval and comparisons. Being fully automatic, the need of manual recordings, readings and calculation is eliminated. Inbuilt time domain waveform analysis and Blood pressure measurements make the task of conducting all the Autonomic Nervous System tests very easy. Cardiac Autonomic Neuropathy Analyser model CANS 504 is an important tool to measure and diagnose autonomic dysfunctions using ECG of R- R intervals and automatic BP measurement. 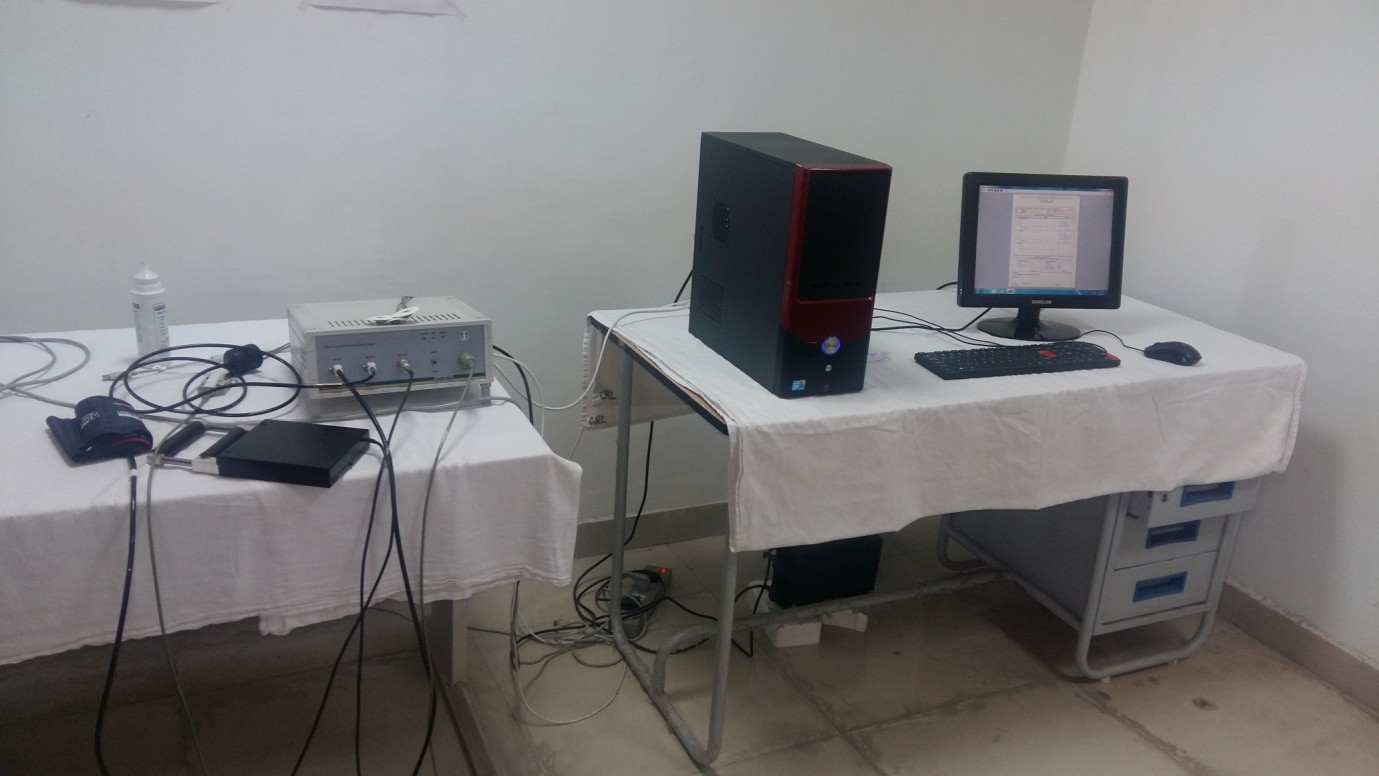 Test for assessing parasympathetic activity include

Isometric hand grip exercise test: Before the exercise, subjects were allowed to rest for 10 minutes in a quiet room. Resting blood pressure of all subjects was measured by auscultatory method with help of mercury sphygmomanometer (DIAMOND). First kortk of sound indicated systolic blood pressure (SBP) and fifth kortk of sound indicate diastolic blood pressure (DBP). Isometric handgrip test was done in both study and control group. After recording basal blood pressure, subjects were asked to perform isometric handgrip exercise. Subjects were told to hold the handgrip spring dynamometer in dominant hand to have full grip. Handles of dynamometer were compressed by subject with maximum effort for few seconds. Then subject were told to perform 30% of maximum handgrip for 3 min. During the test blood pressure was recorded from non exercising arm and again recorded after 5 min after exercise.

Mean and standard deviation of sympathetic and parasympathetic tests were carried out for study as well as control group. Statistical analysis was done by calculation of “p” value and “t” test.

Table 4 showed the sympathetic parameter for study and control groups that study group had lower value of 3.63±7.45 for sustained hand grip exercise as compared to value of 5.63±6.65 for control group which showed no statistically significant change (p>0.05).

Our data showed increased parasympathetic activity in study group(pregnant females) as compared to control group(non pregnant female) whereas test for sympathetic activity didn’t show any difference between both groups, indicating a reduced role of the sympathetic nervous system in the long- term regulation of blood pressure during normotensive pregnancy. In a study here is shown that peripheral resistance continued to decrease up to 25th week. There was evidence that increased nitric oxide activity that plays major role for pregnancy associated decrease in systemic resistance and this decrease in systemic resistance continued up to 25th weeks of pregnancy.9 The statistically significant increase in resting heart rate of pregnant group in our study may be explained by the Bainbridge reflex occurring due to increase in end diastolic volume caused by haemodilution.

A significant response in heart rate was found in the study done in the second trimester but the difference became insignificant only when the resting heart rate was used as a covariate.2 Use of non invasive methods for assessment of autonomic functions has been an area of special interest since they have the advantage of having minimal risk for the mother and fetus.10 The beginning of pregnancy is associated with sympathetic reactivity, whereas the latter half of pregnancy is characterized by increased hemodynamic stability during orthostatic test.11 Deep breathing is sensitive non invasive manoeuvre to quantify cardiac parasympathetic reactivity.12

With the onset of isometric contraction, there is a prompt increase in the heart rate which causes a 30- 35% increase in cardiac output and blood pressure. A somatic pressor reflex and central nervous system regulation contribute to the hemodynamic changes.16 The initial heart rate increase during isometric contraction is due to vagal withdrawal. The subsequent slower increase in heart rate is partly mediated by cardiac sympathetic stimulation.17 The responses to the isometric handgrip test seem to be conflicting in pregnancy. Longitudinal studies starting before pregnancy have shown that the heart rate response to the isometric handgrip test is unaltered.18 In contrast to this, maximal isometric exercise near to fatigue with leg extension has been reported to raise the total peripheral resistance without a change in cardiac output during the second half of pregnancy.19 The heart rate and pressor response to maximal isometric exercise of short duration is unaffected by pregnancy. Since the initial blood pressure increase is due to a rise in cardiac output, the result suggests that the vagal withdrawal induced by the somatic pressor reflex is unchanged in pregnancy.15

The results implicate that sympathoadrenal responsiveness to somatic provocation is essentially unchanged in pregnancy. The reduced blood pressure response reported could be due to an antagonist effect of the products of the uteroplacental unit, such as progesterone or a diminished contractile response of the blood vessels to adrenaline. The reproducibility of the blood pressure response in the isometric handgrip test is poor.19 In our study multiple variables for control of haemodynamics in mid pregnancy were assessed reflecting that there was an increased parasympathetic activity as compared to sympathetic activity in mid pregnancy possibly explained by role   of Bainbridge reflex and baroreceptors gain in mid pregnancy.

Cardiovascular regulation has to maintain stable BP conditions in spite of higher blood volume, less viscosity and a huge arteriovenous shunt coming from the uteroplacental circulation, while respiratory regulation has to assure chemical homeostasis allowing for increased metabolic needs of the fetus, placenta and several maternal organs. In normal physiologic conditions the cardiovascular system is closely linked to the respiratory system. In our study it was found that there were significant change to resting heart rate and deep breathing among the study group (pregnant females) as compared to control group(non pregnant females) reflecting higher parasympathetic activity in mid pregnancy while test for sympathetic system has not shown significant difference amongst both group. Our study showed role of parasympathetic activity in controlling haemodynamics in mid pregnancy and it may help to return the arterial pressure to non pregnant level by causing haemodilution, although when the increase in activity is excessive, hypertension may ensue. So adaptive control of haemodynamics in mid pregnancy is important to study whose dysfunction may lead to pregnancy related complications- pregnancy induced hypertension, pre eclampsia and eclampsia, therefore help in preventing them at early stage.

To conclude our study showed role of parasympathetic activity in controlling haemodynamics in mid pregnancy and it may help to return the arterial pressure to non pregnant level by causing haemodilution, although when the increase in activity is excessive, hypertension may ensue. So adaptive control of haemodynamics in mid pregnancy is important to study whose dysfunction may lead to pregnancy related complications- pregnancy induced hypertension, pre eclampsia and eclampsia, therefore help in preventing them at early stage. However further studies in this matter are required to correlate autonomic nervous system function with fluctuation in gestational hormones.