Background: Hearing plays an important role in our daily activities, if it is impaired or lost the quality of life is affected by improper communication. The diabetes mellitus is a chronic metabolic disorder and affects all the systems in the body including auditory system. So assessment of hearing is important in diabetics to know the type, extent of hearing impairment which helps to take treatment decisions and preventive measures.

Materials and Methods: Type 2 diabetic patients with (WHI) and without (WoHI) hearing impairment, both the gender was included with age limit between 35-55 years and also ten normal subjects were included as controls. Pure tone average (PTA) is the average of hearing threshold levels at different frequencies; it gives information about an individual’s hearing level in each ear.

Statistical Analysis: All the data were expressed as mean ± SE. The mean were analyzed by one way ANOVA. Pearson correlation test was done to see the relationship between right and left ear PTA values in normal subjects, WoHI and WHI groups with HbA1c values.

Conclusion: The pure tone audiometry is helpful to know the status of hearing sensitivity and type, severity of the hearing impairment in the T2DM patients in relation to HbA1c levels.

Hearing plays an important vital role in our daily life and when it affects the quality of life also affected significantly in different aspects.1, 2 Hearing loss can develop due to non-preventable causes like age, genetic factors, neurological diseases, and preventable causes like metabolic disorders, ototoxic drugs, noise. So it is important to identify the cause and treat it as early as possible to prevent further damage and reduce the disability status.3, 4, 5

Diabetes mellitus is a chronic metabolic disorder and in uncontrolled state it affects all the systems in the body and causes cardiovascular abnormalities, peripheral vascular diseases, nephropathy, peripheral and central neuropathies.6 Type 2 diabetes mellitus (T2DM) also affects the auditory system and results as sensorineural hearing impairment with difficulty in hearing and understanding of speech.7 So it requires hearing assessment to know the status of hearing and to prevent the further damage. The present study is carried out as cross sectional study with and without hearing impairment to determine the hearing loss in T2DM with pure tone audiometry in relation to the HbA1c.

The present study was a cross-sectional study and carried out after getting the ethics committee approval (FWA00002084; dated 16/03/2015). Type 2 diabetic patients with hearing impairment (WHI) (n=50) and without hearing impairment (WoHI) (n=50), both the gender was included with age limit between 35-55 years; minimum duration of diabetes after the diagnosis was 5 years and also ten normal subjects were included as controls. The participants were enrolled in the study after acquired the informed consent.

In diabetes, long-term maintenance of blood glucose is important to prevent complications. HbA1cis an indicator of the average glucose concentration in the blood over a period of four months. The HbA1c was measured by using anticaogulated venous blood with latex agglutination inhibition assay (the absence of agglutination is diagnostic of antigen provides a high sensitive assay for small quantities of antigen) with “Rx imola automated analyser (open system)”. Protease enzyme in the haemoglobin denaturant reagent lyses red blood cells and causes hydrolysis of the haemoglobin. The concentration of HbA1c and the total haemoglobin concentrations are measured and HbA1c was calculated as a % of the total haemoglobin concentration. A normal range of HbA1c was 4-6.5% (normal), 6.5-7.5% (target range for those with diabetes), 8-9.5% (high) and greater than 9.5% (very high).

Pure tone audiometry is the basic subjective audiological evaluation that assists to rule out the presence or absence of hearing loss with testing the air conduction (AC) and bone conduction (BC) mechanisms in both the ears and is carried out in a sound attenuated room. The obtained results are plotted as decibels in graph called audiogram; it serves to establish severity of hearing loss. In the present study pure tone audiometry is done by using instrument “Elkon 3N3 multi diagnostic audiometer with TDH-49 P headphones and B71 RADIO EAR bone vibrator”. The stimulus used is pure tone, continuous in nature and method is Hughson-Westlake descending method.8

Pure tone average (PTA) is the average of hearing threshold levels at the frequencies 500Hz, 1000Hz, 2000Hz and 4000Hz. This value gives information about an individual’s hearing level in each ear and these frequencies are considered to be most important for understanding speech. It is calculated by pure tone audiometry.8

All the data were expressed as mean ± SE. The mean were analyzed by one way ANOVA (Student-Newman-Keuls method). Pearson correlation test was done to see the relationship between right and left ear PTA values with HbA1c values in normal subjects, WoHI and WHI groups. For all the statistics and graph plotting, SigmaPlot 13.0 (Systat software, USA) was used. P <0.05 was considered as significant.8

One way analysis of variance of PTA in normal subjects, T2DM WoHI and WHI groups

The ‘F’ and P values are comparing normal subjects, WoHI and WHI of right and left ear.

a – significantly different from normal subjects

b – significantly different from WoHI group 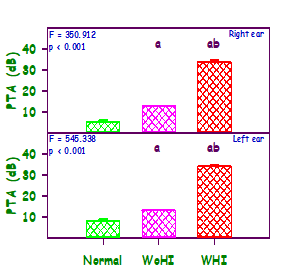 Correlation of independent variables and PTA in normal subjects

Correlation of independent variables and PTA in all subjects

Correlation of pure tone average (dB) and HbA1c (%) in type 2 diabetes, without (WoHI) and with (WHI) hearing impairment 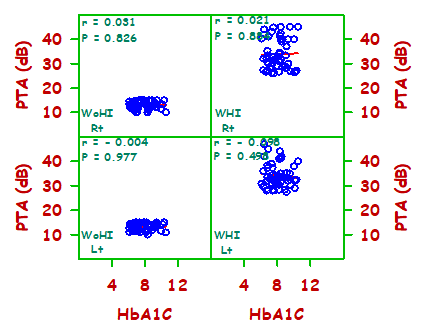 Diabetes has many negative effects on all the systems in the body and affects physiological activities. The lacuna is there in literature about the relationship between diabetes and hearing impairment and its role in pathophysiology, development of hearing loss impairment.9, 10, 11 The hearing loss in diabetes is progressive, bilateral, and involving high frequencies, there are also studies describing loss in all frequencies.12, 13 In the present study, pure tone average values were increased in both ears of WHI group when compared with normal subjects, WoHI group; similar findings found in previous research in line with the present study.14, 15

To study the effect of diabetes on hearing is difficult because of many confounding factors like presbycusis, hypertension and obesity. Vaughan et al (2006) have shown that though the other researchers found hearing loss in diabetes, other factors like noise exposure, ototoxic drugs, duration of disease, metabolic control and the presence and degree of complications and presbycusis also affect both glucose metabolism and cochlear function. Due to this, the establishment of association between hearing loss and diabetes is difficult.8, 16

In the present study there was no difference between the right and the left ear pure tone average values in the WHI group, it may be due to diabetic systemic changes affect the body as a whole, thus leading to symmetrical hearing loss in both ears of WHI group.8, 17

The hearing loss depends on the control of diabetes. To detect the control of diabetes different parameters like FBS, PPBS and HbA1c are used; these are highly varies with the higher frequencies than the lower frequencies of sound. In the present study the HbA1c is considered as a marker to describe the control of diabetes. In the present study, pure tone average values are not statistically correlated with HbA1c for both the ears in WoHI and WHI groups and this finding is in line with Rajendran et al (2011) study, which stated that glycaemic control does not alter the hearing sensitivity.18 In the present study, the HbA1c values are correlated with PTA values in all subjects. This result is in line with the previous research19, 20, 21 and contradictory with other studies.18, 22

The PTA is useful to know the status of hearing sensitivity and type, severity of the hearing impairment in the T2DM patients. The left ear of both WoHI (P=0.977) and WHI (P=0.490) groups showed negative correlation with HbA1c. The HbA1c values are correlated with PTA values in all subjects. The present study can be helpful to the physicians to screen all old and newly diagnosed diabetic patients with pure tone audiometry, even if the patient does not have any complaint.

Research reported in this publication was conducted by scholars at the Fogarty International Center of the NIH training program under Award Number D43 TW 009078. The content is solely the responsibility of the authors and does not necessarily represent the official views of the National Institute of Health.