Shivanal, Parashuram, and Dakshayani K R: Morphometric study of adult human gall bladder in a cadaver and its clinical importance

Background: Extrahepatic biliary apparatus comprises of gall bladder, cystic duct, hepatic ducts and common bile duct. Gall Bladder is a pear shaped hollow organ, which are situated in contact with the under surface of right lobe of liver. In adult the length is between 7-10 cm, maximum breadth being 3 cm and with a maximum capacity of 50 ml. The morphological and morphometric variations of gall bladder are common. These variations are well studied and documented by the earlier studies but its precise morphological types and its incidence are utmost important during diagnostic and therapeutic procedures. Hence, comprehensive knowledge of variations of gall bladder will be important to avoid complications during surgical procedures and radiological interventions.

Materials and Methods: The study was carried on 50 liver with Gallbladder specimens obtained from 10% formalin fixed cadavers of age group 50-60 years in the department of Anatomy. The gall bladder was observed, dissected carefully and studied for its parameters i.e. length and breadth using Vernier calipers. The variations in shape, its external morphological features and its position were also noted.

Results: 52% of the gall bladder specimens had length ranging between 7 – 10cms. 68% of the specimens had transverse diameter ranging between 3 – 5cms. Various shapes observed were Pear shape, Hourglass shape, Retort shape, Cylindrical shape and Flask or Irregular shaped. The commonest shape observed and recorded in this study was Pear shaped in 26 specimens (52%). Folded fundus (Phrygian cap) of gall bladder was found in 2 out of 50 specimens (4%) and Hartmann’s pouch was found in 7 out of 50 specimens (14%).

Conclusion: The precise knowledge of the various morphological and morphometric variants of the gall bladder is important for the operating Surgeons and Radiologists. The preoperative diagnosis of these variations helps to reduce the complications like bleeding and biliary leaks.

Extrahepatic biliary apparatus comprises of gall bladder, cystic duct, hepatic ducts and common bile duct. The gallbladder is a slate-blue, pear-shaped sac, partly sunk in a fossa or depressed area in the right hepatic lobe’s inferior surface. It extends forward from a point near the right end of porta hepatis to the inferior hepatic border. Its superior or upper surface is attached to the liver by a connective tissue and elsewhere it is completely covered by peritoneum. It is a pouch like or blind ended diverticulum, leading to cystic duct and finally attaching itself to common bile duct. Gall bladder is 7-10 cm long, 3 cm broad at its widest part and has a capacity of 30-50 ml. It is described to have neck, body and fundus. The neck presents itself at the medial end close to porta hepatis and sometimes widens or dilates to form “Hartmann’s Pouch”. The body of gall bladder comes to lie in contact with liver surface. The fundus projects past the lower border of the liver to a variable length. The gall bladder varies in size and shape.1 Sometimes gall bladder may be absent or double in number or bifurcated. A variation seen in the gall bladder with respect to its fundus is called Phrygian cap. Gall bladder varies in its position which includes intrahepatic, retrohepatic, retroperitoneal, suprahepatic, floating, anterior epigastric and transverse position.2 The present study helps Surgeons and Radiologists in the better understanding of normal and variants of gall bladder.

The study was carried on 50 liver with gallbladder specimens obtained from 10% formalin fixed cadavers of age group 50-60 years in the department of Anatomy. The study was approved by Institutional ethics committee. Cadavers with abdominal surgeries, crush injuries of the abdominal organs and with a history of liver diseases were not included in the study.

The gall bladder was observed, carefully cleaned, dissected and studied. The following parameters were studied:

Its maximum length and maximum transverse diameter was measured using Vernier caliper and graduated in centimetres.

The recording of maximum length of gall bladder was measured from the porta hepatis to the mid-point of the fundus.

The recordings of maximum breadth were obtained at the site of maximal gallbladder width perpendicular to the long axis of the gall bladder and were noted.

The descriptive statistics recorded - minimum, maximum proportions, percentage and range. All the measurements were statistically analysed by using SPSS 21.0.

The classification of gall bladder was made in according to their shapes. Various shapes observed were Pear shape, Hourglass shape, Cylindrical shape, Retort shape, Flask and Irregular shaped. The commonest shape found were Pear shape – 26 specimens (52%).

The part of gall bladder below the inferior or lower border of liver varied between 0.5-4 cm. 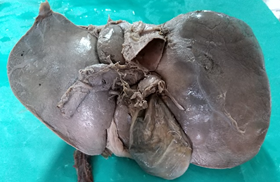 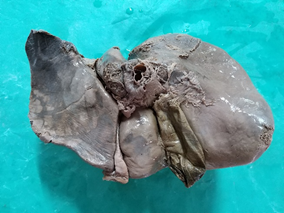 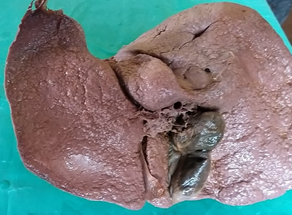 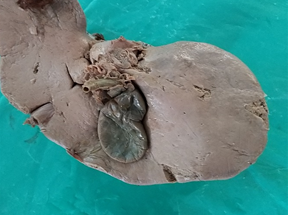 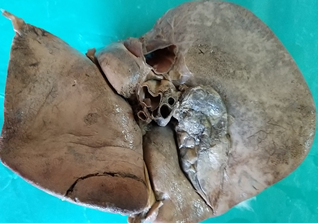 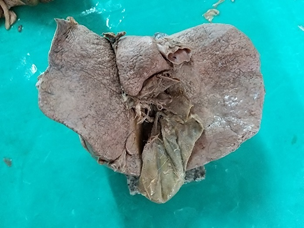 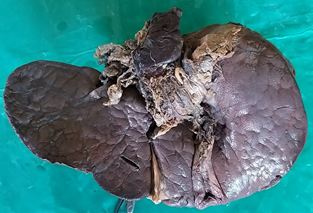 At the beginning of the fourth week of normal human embryonic development, the liver, gall bladder, and its biliary ductal system starts developing from the hepatic endodermal diverticulum of the foregut. The diverticulum proliferates and projects into the septum transversum, which is a mesodermal plate present between the stalk of yolk sac and pericardial cavity. Later it divides into 2 parts – the cranial bud or part which give rise to liver and the bile ducts while its caudal bud or part gives rise to gall bladder and the cystic duct. Any malformation in the extrahepatic biliary system or apparatus may be caused due to some alterations in the normal embryonic development.3

The gall bladder varies extensively in its size and shape. The size of gall bladder may vary in different pathological and physiological conditions. The gall bladder with its increased size was observed and noted in diabetic conditions due to autoimmune neuropathy, pregnancy, sickle cell diseases, cystic duct or may be of common bile duct obstructed conditions, after truncal or selective vagotomy and in extreme obesity.4

According to our study, the gall bladder had length ranging between 3 – 11cms which is similar to the study done by Prakash et al, 5 Desai,6 Rajendra et al7 and Nadeem.8

The commonest shape recorded in this study was Pear shaped, noted in 26 specimens (52%) similar to the observations of Rajendra et al7 and Suman,2 followed by Cylindrical shaped in 11 specimens (22%) closely corresponding to the study done by Rajendra et al,7 Suman,2 Purvi et al9 and Stuti,10 Hourglass shaped in 7 specimens (14%), Retort shaped in 5 specimens (10%) and least common being Irregular shaped in 1 specimen (2%) in which the fundus was ‘V’ shaped.

The common variants of gall bladder are the folded fundus also known as Phrygian cap and variations at the level of neck of the gall bladder. Phrygian cap, a deformity in fundus of gall bladder, wherein the fundus is folded on the body which results in separation of the fundus from the body in partial is considered to be normal anatomical variants of gall bladder. It was first described by Bartel11 in the year 1916 who documented and recorded 43 cases at autopsy. Boyden 12 in the year 1935 found this deformity to be present in 7.5% of the 80 autopsy specimens and 3.6% of the studied cholecystograms. In 1937, Lichtenstein13 reported 3% out of 212 specimens. It was reported to have been precipitated by a local thickening of the gall bladder wall and may be of little importance as the gallbladder function is usually normal. They also explained that it can be due to a disproportionate size of the gall bladder with that of the gallbladder bed, but with no pathological significance.13 This variant is usually symptomless and are diagnosed on ultrasonography or on x-ray.14 These types of variants can be mistaken for stones.15

Hartmann’s pouch is a dilatation or widening at the level of the neck of gall bladder. It is of two types–developmental and acquired types. In congenital / developmental type, all the layers of gall bladder wall are present, but in the acquired variety / type it may result from some other disease process and has got little or there may be absence of smooth muscle in its wall. In these cases, patients may present with clinical symptoms and also signs and are usually associated with cholelithiasis (stones in gall bladder) and carcinoma of gall bladder. This can conceal or cover the cystic duct and calot’s triangle which may lead to a condition like mucocele and Mirizzi’s syndrome, in which the compression of the ducts can be caused by the gall bladder stones impacted within the Hartmann’s pouch.16 Futara et al. observed and recorded that there was a higher prevalence of kinking of the gallbladder and Hartmann’s pouch in the females than in male subjects which may be related to the higher cases of gall bladder stone formation and biliary tract diseases in females.17 In this study, we found the Hartmann’s pouch in 7 specimens (14%), which is higher than the observations noted by Nadeem8 7% and Bharathi et al18 noted in 2 specimens (3.33%). Hence preoperative diagnosis of presence of dilatation at the level of neck of gall bladder should be done to avoid post-operative and intraoperative complications.

Among all the different types and shapes of gall bladder, the rarely observed abnormal variant of gall bladder is intrahepatic gallbladder, which may present as partial type or complete type. In case of partial type, a part of the gall bladder may be seen as projecting outside from within the substance of liver. Whereas in complete type, the gall bladder is completely embedded within the parenchyma or the substance of the liver. It is a developmental anomaly and is caused due to congenital arrest in the movement of gall bladder from its intrahepatic position in the 2nd month of gestation to its normal superficial location. These types of variants can be diagnosed by ultrasonographic techniques or by Computed Tomography scan.

The part of gall bladder below the inferior border of the liver is the most susceptible length of gall bladder that may get injured or damaged in various laparoscopic procedures.10 Stuti et al.10 reported it as being between the range of 0.46 -3.93 cm and Prakash et al5 reported between 0.4 -2.5 cm. In our study it was between 0.5 - 4 cm which was similar to these studies.

Gallbladder size and its volume are the key determinants of gallbladder contraction and function. These parameters get altered with age and can be explained of the age-related reduction in gallbladder contractility and its association with gallstone formation. The gallbladder volume shows a statistically significant increase with age and there is a marked increase in these parameters after the 5th decade. This explains the exponential increase in prevalence of cholelithiasis and cholecystitis by 4 to 10 times after the 5th decade of life. Individuals with a higher resting gall bladder volume and a higher residual volume after meals would have less post prandial fractional emptying. It is also observed and established that larger gallbladder volumes in older individuals are the predictors of impaired gallbladder motility and bile stasis which may predispose the normal subjects to further gall stone and biliary sludge formation.21

These findings may suggest the clinicians that measurements obtained from cadaveric specimens can be compared with those from the ultrasonographic measurements done in vivo are comparable. The measurements obtained from cadaveric studies can be used as a baseline data to interpret ultrasonographic parameters and may advise the asymptomatic individuals for their further prevention of predisposing factors and may avoid complications of the gallbladder.

The reporting and documentation of various congenital anomalies and morphological variations of extrahepatic biliary apparatus are not common. However, the detailed study of morphological variations and morphometric knowledge helps Surgeons, Radiologists to reduce morbidity. Awareness of these variations may help them to relook at the pathological conditions while performing interventional procedures. Failure to recognise can lead to iatrogenic injuries. The common complications encountered during surgical procedures are intraoperative bleeding and also biliary leaks. Nowadays most of the surgical procedures like cholecystectomies (removal of gall bladder) is done laparoscopically and it is important as well as necessary to have a precise awareness of morphological variations of gall bladder in an attempt to perform safe cholecystectomy and to avoid re-exploration of the patients.