Background: Diabetic nephropathy is a one of the microvascular complication in patients with type 2 diabetes mellitus due to increased production of free radicals and decreased levels of anti oxidants. The seviority of the disease totally depends on due to damage of foot process of podocytes. Hence, we need to evaluate the altered structural changes of podocytes, glomerular basement membrane in patients with type 2 diabetes mellitus.

Materials and Methods: A total 60 type 2 diabetes mellitus patients were included in the present study and again sub classified into 2 types (Normoalbuminuria 30, Microalbuminuria 30) based on their urinary ACR. Basic laboratory investigations and radio graphical data were collected from the all subjects. A statistical was performed by using SPSS Version 21.0 and P value considers < 0.05 is statistically significant.

Conclusion: The increased levels blood sugar and HbA1c, Urinary Albuminuria directly indicates the damage of podocytes and glomerular basement membrane in the kidney. This study suggest continuous monitoring of these parameters may helpful for progression of type 2 diabetes mellitus complications.

Type 2 diabetes mellitus (T2DM) is one of the most leading mortality and morbidity disorder in worldwide and it is caused by hyperglycemia due to insulin resistance. Insulin resistance is characterized by impaired insulin secretion and activation from the beta cells of pancreas due to genetic, family history, advanced life style changes, metabolic, smoking and alcoholism are the major risk factors.1 The prevalence of T2DM in worldwide is 410 million peoples are affected according to 2015 and this number will increase up to 650 million by the 2030. In Indian scenario 65 million peoples were affected according to 2013 and this number will reach up to 109 by the year 2030.2, 3 Glycated hemoglobin (HbA1c) is a minor hemoglobin component in human erythrocytes that is formed as a result of the attachment of hexose group as a ketamine to the N-terminal valine of the normal β-chains of the hemoglobin A1.4 The rate of formation of hemoglobin is directly proportional to the time-average concentration of glucose within the erythrocytes.5 Hence, HbA1c is widely used as a marker of chronic glycaemia, reflecting average blood glucose levels over a 2 to 3-month period of time, which is the half-life of erythrocytes. HbA1c levels were shown to correlate with microvascular and macrovascular complications of diabetes and hence widely used as a biomarker to assess the adequacy of glycemic management.6

Diabetes is the most common cause of end stage renal disease. Diabetic nephropathy, also known as diabetic kidney disease is a clinical syndrome characterized by the occurrence of persistent microalbuminuria, decreased renal function, hypertension and an increased risk of cardiovascular morbidity and mortality and is associated with type 2 diabetes mellitus.7, 8 Diabetic nephropathy develops as a result of complex interaction between various pathways including metabolic, hemodynamic, inflammatory and other pathways.9 Metabolic factors include hyperglycemia and associated pathways such as formation of AGEs and polyol pathway. The renin angiotensin system with its vaso active hormones comprises the hemodynamic component.10 The interaction between the metabolic and hemodynamic pathways results in the generation of inflammatory and prooxidant state that ultimately cause damage to the glomerulus, podocytes and also to the tubulo interstitial tissue via signalling pathways that involve activation of nuclear factor kappa B (NF-κB) and protein kinase C.11 The key pathological event in diabetic nephropathy is damage to the glomerular basement membrane. The initial hemodynamic abnormality is glomerular hyperfiltration associated with intra glomerular hypertension. We aimed to evaluate the altered structural changes of podocytes, glomerular basement membrane in patients with type 2 diabetes mellitus.

This is a prospective observational study conducted at akash institute of medical sciences and research centre, Bangalore, Karnataka. A total 60 patients diagnosed with type 2 diabetes mellitus according to American diabetic association (ADA) criteria12 and further sub grouped into two groups 30 T2DM with Normoalbuminuria (< 30 mg/dL) and 30 T2DM with Microalbuminuria (< 30 - 290 mg/dL) based on urinary albumin creatinine (ACR) ratio. All the subjects were included after obtaining institutional ethical clearance and informed consent. Inclusion criteria all the subjects’ age should be more than 30 and less than 70 and whoever the persons suffering with type 1 diabetes mellitus, liver, kidney, thyroid cardiovascular, cerebrovascular and peripheral vascular diseases excluded from these study.

Four (4) mL of fasting venous blood sample was collected from all the subjects into two tubes: 1 mL into a tube containing (anti glycolytic and anticoagulant), and 3 mL into a plain tube. Plasma samples were separated immediately and plain samples were allowed to clot and separated by centrifugation at 3000 rpm for 15 min. The separated samples were transferred into appropriately labeled aliquots and stored at -800 C until biochemical analysis was done. Spot urine sample was collected along with the blood sample and was processed immediately for albumin and creatinine. The plasma fasting Blood Sugar, post parandial blood sugar, HbA1c serum urea, creatinine, uric acid and urinary albuminuria (ACR) was measured by laboratory standard methods.

Table 1 shows the assessment of data distribution in two groups of type 2 diabetes mellitus subjects by using komogorov smrinov test. The parameters studied had at least one group with not normally distributed data. Hence, data was logarithmically transformed before applying parametric statistical tools.

Table 3 shows the Pearson’s correlation analysis of the biomarkers in the study groups with characteristics of diabetes. The HbA1c and Urinary albuminuria were positively correlated with FBS, PPBS, Urea, Creatinine, Uric acid among two groups of study subjects. 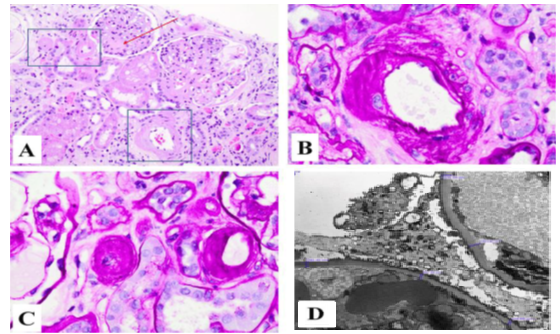 Diabetic nephropathy is one of the leading cause of ESRD and is becoming more prevalent Globally. DN is a clinical syndrome characterized by persistent albuminuria recorded at least twice within a 3 to 6 months interval, progressive reduction in GFR, and hypertension.13 Since recent years, our understanding of the clinical course of diabetic nephropathy, various factors contributing to its pathophysiology and treatment modalities available has increased.14 It is considered that diabetic nephropathy develops as a result of complex interaction between metabolic, hemodynamic, inflammatory, oxidant-antioxidant and other pathways that ultimately cause damage to the glomerulus, podocytes and also to the tubulo interstitial tissue via signaling pathways that involve nuclear factor kappa B (NF-κB) and protein kinase C activation.15, 16 A better knowledge of the risk factors for diabetic nephropathy, early detection of patients at risk for diabetic renal disease, as well as early initiation of appropriate treatment will definitely help in reducing the morbidity and mortality due to DN. Current evidence suggests that hyperglycaemia, progressive Microalbumin levels in urine, increase serum lipids, blood pressure levels, Glycosylated hemoglobin, smoking, physical inactivity, older age, high level of insulin resistance and origin of dietary protein also seem to play a role as DN risk factors.

In the present study, the mean ± SEM of FBS, PPBS, Urea, Creatinine, Uric Acid, HbA1c and Urinary albumin levels in T2DM patients with microalbuminuria and T2DM patients with normoalbuminuria was found to be increasing respectively; p<0.0001**. The Glycosylated hemoglobin and urinary albuminuria positively correlated with Plasma FBS, PPBS, Urea, Creatinine and Uric Acid. Microalbuminuria is currently recognized as the earliest marker of DN in clinical practice. However, a large proportion of renal impairment occurs in a non-albuminuric state or before the onset of microalbuminuria. The tubulointerstitium plays a pivotal role in the pathogenesis of various kidney diseases, and the degree of tubulointerstitium damage is strongly associated with renal prognosis.17 The key pathological event in diabetic nephropathy is damage to the glomerular basement membrane which results in the appearance of albumin in the urine known as albuminuria, which is the earliest clinical evidence of nephropathy. The foot processes from the neighboring podocytes are connected with each other by a specialized intercellular junction called a slit diaphragm (SD). SD is made up of proteins including nephrin and podocin. The reduced number of podocytes due to increased apoptosis and detachment from the glomerular basement membrane is observed in the diabetic kidney, resulting in leakage of albumin through areas of denuded podocytes. In addition to widening of the foot processes, shortening of the slit diaphragm/loss of slit diaphragm proteins, changes in the actin cytoskeleton, decreases in negative charge and elevated intraglomerular pressure also contribute to albuminuria in DN. Podocytes injury biomarkers are regarded as glomerular markers. Podocytes injury has been reported as an early feature of DN.

The increased levels blood sugar and HbA1c, Urinary Albuminuria directly indicates the damage of podocytes and glomerular basement membrane in the kidney. This study suggest continuous monitoring of these parameters may helpful for progression of type 2 diabetes mellitus complications.

It is purely being done with the idea of research and all the cost of the study will be borne by the investigator.