Objective: Diet rich in fat is one of the main risk factor for the development of Alzheimer’s disease. Studies have shown that diet rich in fat disrupts memory and learning. The present study evaluates the ameliorative role of Ginkgobiloba and Rosuvastatin against high fat diet induced neurotoxicity in CA1 (Corona Ammonis) region of hippocampus.

Results: There was enhancement of spatial learning in treatment group rats. Furthermore, a significant increase in dendritic length and branching points was observed in CA1 region along with significant decrease in the Superoxide dismutase in rats treated with higher dose of Ginkgobiloba and Rosuvastatin.

CA1 is considered as the main output area of the hippocampal network and contributes to incremental learning and responsible for autobiographical memory. Lesions in CA1 region results in non-learning of contextual fear conditioning.4, 5

Western diet rich in cholesterol and fat resulted in neuroinflammation of brain and led to memory impairment in rats.6, 7, 8 Previous studies have shown that diet rich in calories and fat caused disruption of blood brain barrier in rats and affected long term potentiation in rats.9, 10 Ginkgobiloba is a Chinese plant, which has been used in traditional Chinese medicine for treating wide range of health disorders.11 The benefits of Ginkgo biloba is attributed to two active chemical components, flavonoids and terpenoids.12 These active constituents have been extensively studied and found to exhibit free radical scavenging properties and antagonize the platelet activating factor.13, 14 Apart from that Ginkgobiloba has a protective role in neurodegenerative diseases15 and possesses a neurotrophic effect on the hippocampus.16, 17 It is proved to augment cholinergic system in central nervous system and enhances memory in rodents and human.18, 19

Adult in-bred male Wistar rats weighing about 120-150g were obtained from the Central Animal House, Mamata Medical College, Khammam. Prior approval of institutional animal ethical committee was obtained for the study (IAEC/DP-05/C16 2012-2013). All the experimental procedures were carried out according to the guidelines prescribed by Committee for the Purpose of Control and Supervision of Experiments on Animals (CPCSEA), New Delhi, India.

Estimation of the body weight

Weight of the animals was measured at the beginning of the study and at the end (after 3 months).

Hyperlipidemia was produced by feeding with cholesterol-rich high-fat diet (HFD) for 3 months. Deoxycholic acid (5g) will be mixed thoroughly with 700g of powdered rat chow diet. Simultaneously cholesterol (5g) will be dissolved in 300g warm coconut oil. This oil solution of cholesterol will be added slowly into the powdered mixture to obtain a soft homogenous cake. This cholesterol-rich HFD will be molded into pellets of about 3g each and will be used to feed the animals.23

100 mg and 50 mg of Ginkgobiloba extract was dissolved in 1% gum acacia solution. This solution was administered to the animals at 50mg/kg body weight and 100 mg/kg body weight with the help of oral gavage needle attached to a syringe for 15 days.24

Rosuvastatin was obtained from Pfizer Pharmaceuticals private limited, Mumbai. It was given at doses10mg/kg body weight and 20mg/kg body weight orally with the help of an oral gavage needle attached to a syringe for 14 days.25

Morris water maze spatial memory of the rats was tested on 90th day by using Morris water maze. The water maze consists of a circular tank of 1.80 m diameter and 75 cm depth. The pool was filled with water and maintained at a temperature of 24-26ºC to a depth of about 50 cm. It was divided into four quadrants and an escape platform of size 4”×4” was hidden approximately 2cm below the water surface in the target quadrant. Water in the pool was made opaque by adding milk just before the experiment. Permanently positioned distinctive objects were placed for facilitating spatial orientation of the animal. Positions of the cues were kept unchanged throughout the period of experiment. The rats were trained in the water maze in 10 sessions on 5 consecutive days, two sessions on each day. Each session consists of four trails. In each trial time taken to reach hidden platform was recorded. If the rat was unable to find the platform within two minutes, the training session was terminated and a maximum score of two minutes was assigned.

Twenty four hours after the last session, rats were subjected to a probe trial. This session was for 30 seconds in which the hidden platform was removed. Here time taken to reach the target quadrant (latency) was measured.26

Rats were deeply anesthetized with ether and sacrificed by cervical dislocation. Brains were removed quickly and placed in a petri dish containing freshly prepared Golgi- cox fixative. The hippocampus was dissected from both hemispheres of the brain. Tissue was processed for Golgi staining.27

The dendritic quantification of hippocampal CA1 neurons was done by using the camera lucida technique.8 -10 well stained pyramidal neurons of CA1 region in hippocampus were selected from each rat and traced using camera lucida device (Dutta scientific works, Bangalore, India). Neurons that were darkly-stained throughout their arborization and with minimal overlap were selected. Neurons with truncated dendritic branches within a 100 μm radius from the cell body were excluded.

The animals were euthanized by decapitation, and the brain was quickly removed and kept in a petridish located on ice. Hippocampus was dissected and homogenised in 1.5% potassium chloride, using a glass type Potter- Elvejhem homogeniser. The homogenate were centrifuged at 800×g for 10 minutes at 4 degree centrigrade.the pellet was discarded and the supernatant was stored at -70 degrees. Superoxide dis­mutase (SOD) activity, expressed as USOD/mg protein, was based on the decrease in the rate of autocatalytic adrenochrome formation at 480nm.28

Analysis of the spatial memory test on the water maze showed that during the first session all the rats failed to reach the escape platform. During the second and third day the NC group animal reached the platform in less time when compared to HFD which suggests memory impairment. In the fourth and fifth day HFD group took longer time to escape on to the platform when compared to NC group. This can be attributed to the deleterious effects of high fat diet on spatial memory.

Rats treated with Ginkgobiloba 100mg/kg took significantly less time (p<0.01) to reach the target quadrant when compared to HFD group. The results of Ginkgobiloba 50 mg/kg treatment were not significant. 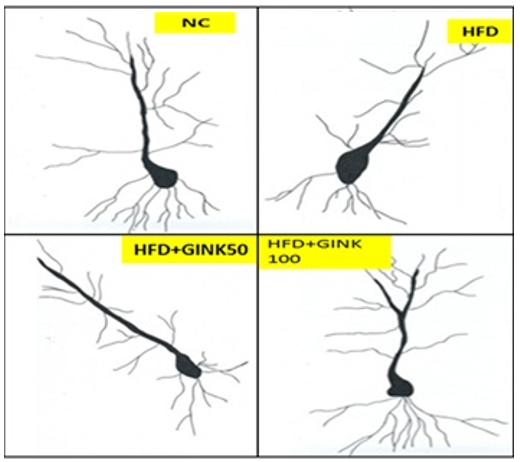 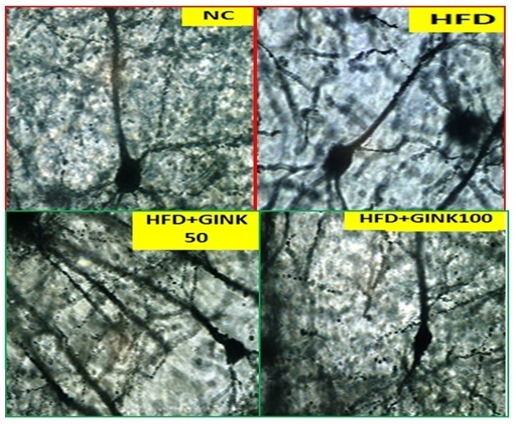 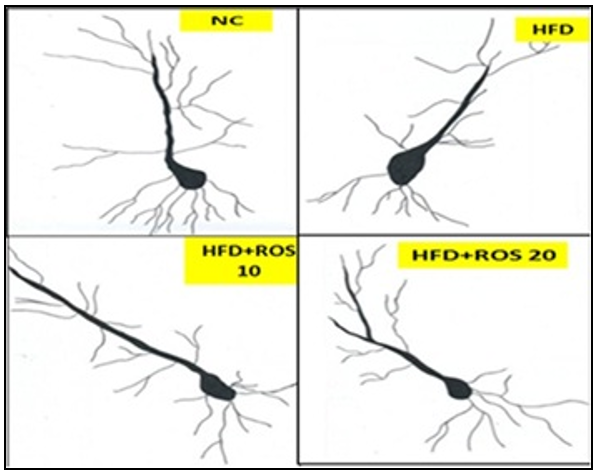 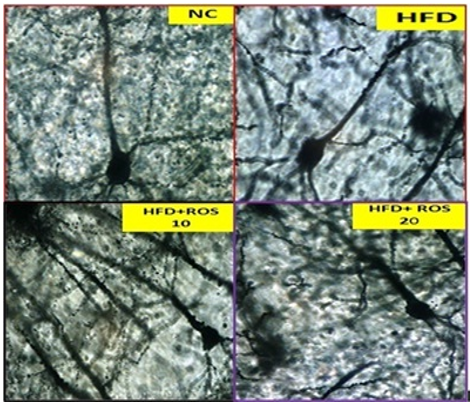 The present study explored the neuroprotective role of Ginkgobiloba and Rosuvastatin in higher doses against the high fat diet induced neurotoxicity. The rats treated with Ginkgobiloba 100mg and Rosuvastatin 20mg showed significant reduction in time taken to enter the target quadrant (Morris water maze) when compared to rats fed with high fat diet which implies both were effective in improving the memory and learning in rats. Apart from that there was a significant increase in dendritic length and branching points in the CA1 region of hippocampus along with decreased superoxide dismutase levels that suggests the ameliorative effect of both the drugs in dose dependant manner.

In addition studies on Ginkgobiloba have revealed that it has reduced the neurodegeneration in hippocampus against fluoride 24 and acrylamide31 induced neurotoxicity in rats. Another experiment on old aged rats have shown that, chronic treatment with Ginkgobiloba have significantly increased the dendritic branching pattern in CA1 and CA3 regions of hippocampus.32

The positive effects of this extract in CA1 region of hippocampus can be attributed to antioxidant, free radical scavenging,33 and antiapoptopic properties.34 In our study also there was a decrease in superoxide dismutase levels. Treatment with leaf extract of Ginkgobiloba enhanced the memory in rats by improving the cerebral blood flow and35 and increasing the brain derived neurotrophic factor which is necessary for long term potentiation.36 Futhermore it also acts on neurotransmitters of brain and improves the cognition.37, 38 Recent studies on Ginkgibiloba have proved to inhibit the formation of beta amyloid in brain of transgenic rats.39

Many clinical and preclinical studies confirm the neuroprotective role of Rosuvastatin against Alzheimer’s disease, Parkinson’s, and Multiple Sclerosis.48, 49, 50

In conclusion, we observed dose dependent increase of dendritic brancing points and intersections in the region of CA1 region of hippocampus in groups treated with Ginkgobiloba and Rosuvastatin. The antioxidant properties, anti-inflammatory and pleiotrophic properties have decreased the neurotoxicity produced by diet rich in high fat. The present study is consistent with the findings of previous research. In our study we proved that by using golgi staining and counting the number of dendritic intersections and branching points.

Authors declares no conflict of interest.

Authors are thankful to Dr. Chandra Mohan, Professor, Department of Anatomy, Mamata Medical College, Khammam for helping us to carry out the research and for the technical support.

J E Lisman N A - Storage Otmakhova Recall and Novelty Detection of Sequences by the Hippocampus: Elaborating on the SOCRATIC Model to Account for Normal and Aberrant Effects of DopamineHippocampus200111551568