Introduction: Psoas minor is long, slender skeletal muscle it lies anterior to psoas major. It is an inconstant muscle. It was absent in 40-70% of subjects.

Aim & Objectives: To determine the frequency and morphometry of psoas minor muscle.

Conclusion: Out of forty specimens Psoas minor was present in three specimens. In one specimen bilateral variations observed, other two specimens unilateral. If it is present, clinical importance to radiologists, surgeons and physiotherapists as it can mimic certain abdominal emergencies.

There can be an occurrence of a variable muscle called psoas minor, which could be unilaterally or bilaterally present. Psoas minor, if present, will be located in front of the psoas major. It is seen to have a small belly and a long tendon.

This muscle arises from the sides of bodies of T12 and L 1. It is inserted into the iliopubic eminence, pectineal line and iliac fascia. The nerve supply for the muscle is derived from the ventral ramus of the first lumbar spinal nerve. It acts as a weak flexor of the trunk. It is a small muscle, it appears only 60% of cadavers. 1

It arises from upper most fibers of psoas major descends on the anterior surface of psoas major muscle, it forming a slender tendon. It is inserted into thickened lower part of fascia which is covering psoas major and iliacus. It is inserted medially to arcuate line of ilium and laterally with iliac fascia to inguinal ligament. L1 nerve supplies psoas minor.

The psoas minor muscle is supplied by branches of lumbar plexus (L1-L3). It is an inconstant muscle which represents the thin ligament or broadening of medial part of iliopsoas. It is an inner hip muscle. It contributes to stabilization of the pelvis. A unilateral contraction may weakly assist in flexing the lumbar vertebrae. Bilateral activation flex the trunk to front. This muscle plays a subordinate role.3

If it is present it lies anterior to psoas major and is confined to abdomen only, has common origin to psoas major, is inserted to iliopubic eminence.4

It is only present in two out of every three individuals, lying on surface of psoas major. It lies in the gutter between the bodies and transverse process of the lumbar vertebrae. It is a weak flexor of the lumbar spine.5

Darwin describes that psoas minor is vestigial muscle like ear muscles, various small tendinous muscles. Darwin mentioned some variants of muscle like psoas tertius, psoas quadrates, psoas accessories it is well-developed in quadrupeds the brachiate and run at high speed. These functions are not required for bipedal gait hence muscle has receded during evolution. Trisomy 18 patients it is consistently absent.6 This reference is not coming sequentially)

The symptoms appear due to compression of retroperitoneal neurovascular structures. Symptoms from psoas minor syndrome can also mimic that of diverticulitis and appendicitis and needs to be ruled out. The accepted treatment is a tenotomy. Patients with psoas minor syndrome will have difficulty performing various exercises, especially jumping.7

The psoas muscles is enclosed in the psoas sheath is formed by psoas fascia, is a part of lumbar fascia. Pus from trabecular infection of the lumbar vertebrae may spread into psoas minor muscle is called psoas abscess. The typical posture of a laterally rotated lower limb following fracture of neck of the femur is produced by contraction of psoas muscle.8

To study the morphology and prevalence of Psoas minor muscle in the Telangana population.

This study was carried out in the Department of Anatomy, Ayaan institute of medical sciences, Moinabad and government medical college, Mahabubnagar, on a total of 20 cadavers (All male) during routine dissection for under graduate MBBS students.

The length, width, and circumference of the muscles were measured by using vernier calipers. The collected data were interpreted in a descriptive manner.

Psoas minor arises from sides of L1-L5, it descends along with psoas major ends in long fleshy tendon. It is present in posterior abdominal wall, is covered by psoas fascia. It is inserted into ilio pubic eminence. 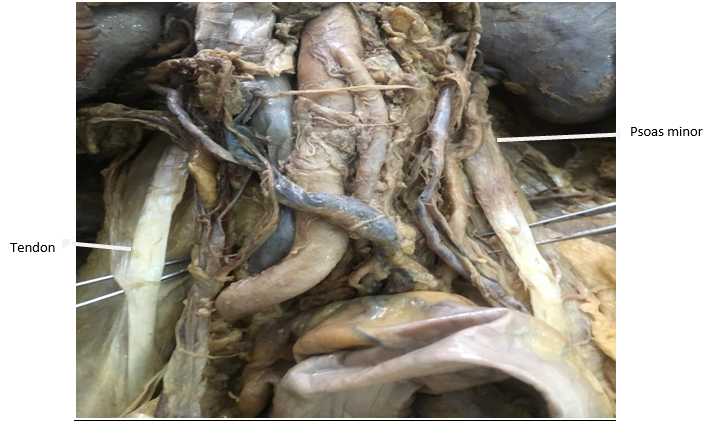 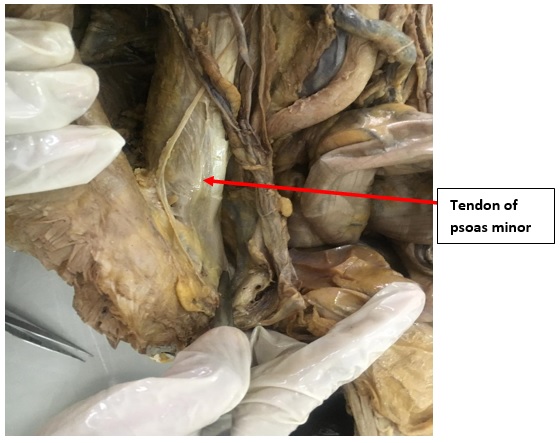 Deepshika S et.al observed that it was present in 55.5%, bilateral in 22.2% cases, unilateral 33,3% cases. It was found anteromedial to psoas major, lateral to common iliac artery. It was showed a variation in distal attachment one case.9

Our study is similar to above study because distal attachment variable. I was found in one specimen.

Jevel et al, stated that psoas muscle group is comprised long fusiform muscles-major, minor and tertius. Psoas major muscle is present in all individuals. Psoas muscle group have differences not only in their structure, morphology and innervation.11

Sonali A observed that psoas minor was present in 40% of cadavers, bilateral in 35%, unilateral 5%, psoas accessories was found in unilaterally in 15% cases.12

In our study observed psoas minor in three specimens out of forty specimens. It arises from T12 and L1 vertebra.

In 1889 Clarkson and Rainy as described the psoas accessories arise from undersurface of tendon of psoas minor passes downward to fuse with internal surface of iliacus and psoas major muscle.8

During the evolution, some muscles of the human body regress are called as vestigial muscles, which are recognized by their short belly and long tendon namely Palmaris longus in upperlimb, Plantaris in lowerlimb and Psoas minor in the trunk. Psoas minor is found only in 40- 60% of population. However, the incidence varies with race and ethnicity.

Therefore, awareness of its occurrence is essential to clinicians for proper diagnosis and treatment.