Prabhu, Samuel, Balakrishnan, and Daniel: An unusual variation in the termination of facial artery in south Indian population: A human cadaveric case report

An unusual variation in the termination of facial artery in south Indian population: A human cadaveric case report

The facial artery is an important artery of the face, prone to many variations. Identification of these variations is of utmost importance in clinical practice, especially rhinoplastic and orofacial surgeries and also super selective chemotherapy procedures. In this case report, we report a bilateral facial artery variation encountered in a male cadaver during routine dissection. Instead of terminating as the angular artery, the facial artery terminated as the superior labial artery, giving the lateral nasal artery as a smaller branch, much closer to the midline than normal. A prominent pre-masseteric branch was noticed along with smaller branches from the infraorbital artery which offered possible compensation for the short facial artery. The case reported is a type II variation according to Bayram classification, and a type C variation as per Loukas classification. This variation is very rare and should be kept in mind while performing any surgical procedures of the face.

The facial, transverse facial, and infraorbital arteries provide for the main arterial supply of the face, the facial artery being the most dominant amongst them. Facial artery arises from the external carotid artery, runs upwards to reach the inferior border of the mandible, follows a tortuous course up to the angle of the mouth, giving the inferior labial and superior labial arteries and further continuing to the medial canthus of the eye, terminating as the lateral nasal artery.1 A pre-masseteric artery given off before the inferior labial artery, running along the superior border of the masseter and supplies the surrounding tissues has been described by Adachi et al.2

There are variations in the pattern of termination of facial artery which are important clinically. These variations are important clinically as facial surgeries require the mobilization of the branches of the facial artery and also, the masseter muscle if exploited by craniofacial surgeons without the knowledge of the occurrence of its pre-masseteric branch can lead to its damage.3 Here we report a case of bilateral facial artery variation which was encountered during the routine anatomy dissections for undergraduate learning.

Here we report a case of bilateral facial artery variation, encountered during routine anatomy dissection of a formalin-fixed male cadaver, for undergraduate learning. We found an unusual variation in the termination of the facial artery. The facial artery arose from the external carotid artery, followed a tortuous path, moving beneath the digastric and stylohyoid muscles, after which it passed through the submandibular gland. It then curved over the body of the mandible and ascended forwards and upwards to the angle of the mouth. Then, instead of running from the angle of the mouth towards the side of the nose, the facial artery took a sharp turn at the angle of lip, continuing as the superior labial artery which anastomosed with the opposite side superior labial artery in the midline above the margin of the upper lip. The lateral nasal artery was given off closer to the midline than usual, as a branch from the superior labial artery, did not give rise to the angular artery and terminated by supplying the lateral part of the nose as inferior alar artery. There was also a single pre-masseteric branch noted on the left side, given off before inferior labial artery. On the right side the pre-masseteric branch could not be preserved during dissection. Few smaller branches from the infraorbital artery were also noted bilaterally supplying the upper part of the side of the nose. (Figure 1, Figure 2) 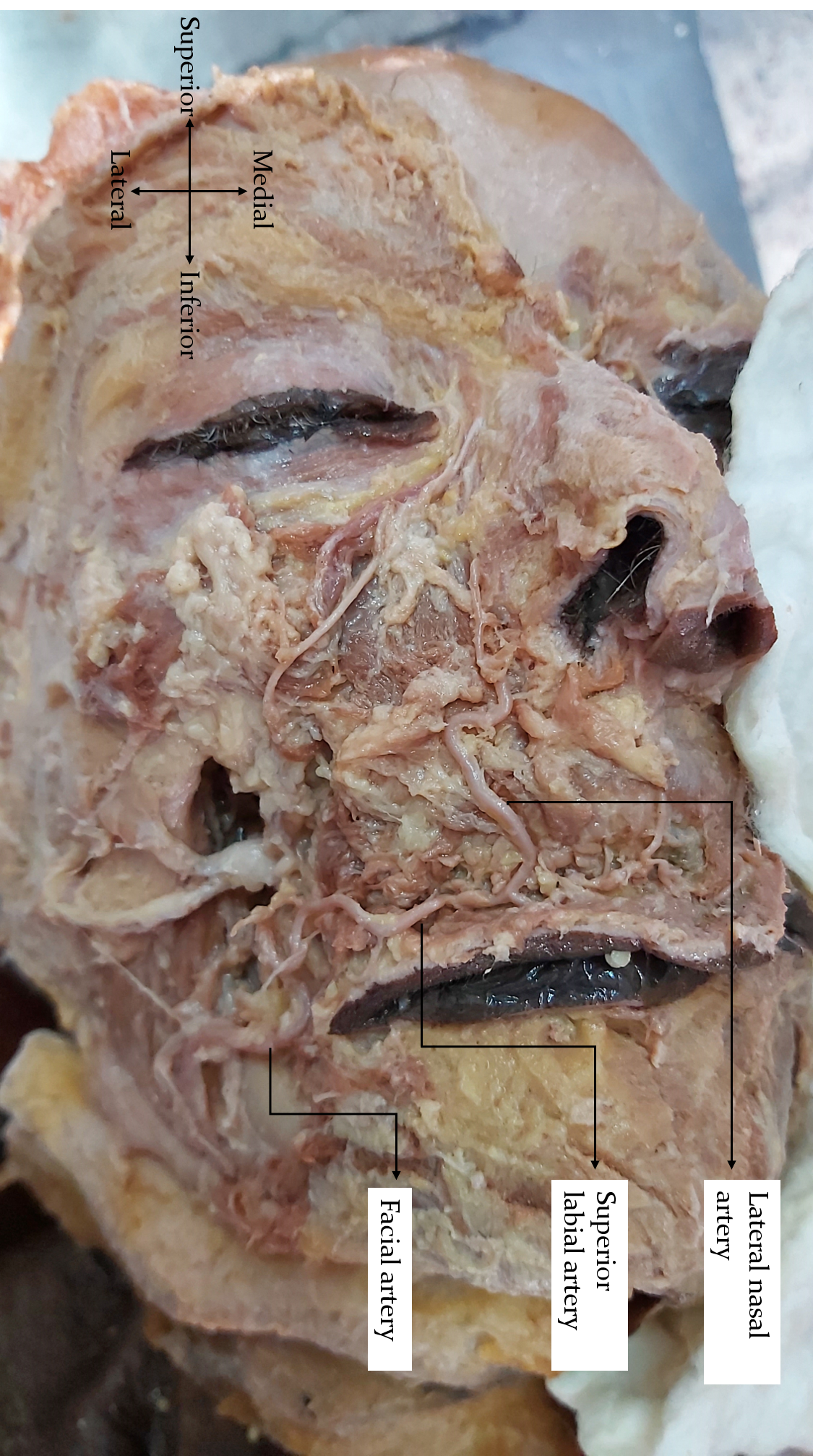 In a cadaveric study done in a south Indian population, facial arteries classified using the Bayram classification were found to be type I (100% right, 78% left) and type III (22% left) in males and type I (80% bilaterally), type II (18% left), and Type III (20% right and 2% left) in females. A pre-masseteric branch was noted in 4 out of 50 hemi-faces studied.7 On comparison with this study, our study being from a similar population, notes the presence of a type II variation in a male cadaver with a pre-masseteric branch on the left side, which was reported as being not present in the above mentioned study population.

We have noted that a pre-masseteric branch along with smaller branches from the infraorbital artery were probably the route of compensation for the unusually small facial artery. Usually, the face is supplied by facial, transverse facial and infraorbital arteries. It has been reported in literature that when the facial artery is hypoplastic, it is compensated by the transverse facial artery.8 In our case report, the compensation of a shorter facial artery is obtained by a pre-masseteric branch which is also reported in literature to be of significant value.2

Therefore, it is important that clinicians be aware of the possibility of variations of the facial artery while performing various procedures of head and neck to avert avoidable damage.