Materials and Methods: A Cross sectional study was carried out using purposive sampling among Medical Students at CIMS, Chamarajanagar. Study duration was 6 months from July 2019 to December 2020. 100 Male and 100 Female Medicos were included in the study after taking informed consent. Differently abled adults were excluded from the study to reduce the error. Structured questionnaire was used to collect the data such as age, gender, height, arm length or Humerus length and distance between medical and lateral condyle.

Conclusion: As a result, these measurements may help to indicate the characteristic morphological features of humeral segments in south Indian population and also help the orthopedic surgeon to place the various implants in the reconstruction of humeral fractures.

Stature estimation is obtained from measurements of long bones; namely the humerus, femur, and tibia. If these bones are unavailable, the ulna, radius, and fibula can also provide a good range for the expected height of an individual.  As many elements as possible should be used in a regression equation to estimate stature. Incomplete fragments can be used to estimate height, by first estimating the complete length of bone from a regression equation before applying the original formula to estimate stature.1, 2

Segment 1 is identified as the entirety of the humeral head

Segment 2 is identified as between the most distal point of the head and the most proximal margin of the olecranon fossa.

Segment 3 is identified as the entirety of the olecranon fossa, from the most proximal to the most distal margins.

A cross sectional study was carried out using purposive sampling among Medical Students at CIMS, Chamarajanagar. Study duration was 6 months from July 2019 to December 2020. 100 Male and 100 Female Medicos were included in the study after taking informed consent. Differently abled adults were excluded from the study to reduce the error. Structured questionnaire was used to collect the data such as age, gender, height, arm length or Humerus length and distance between medical and lateral condyle.

Equipment’s used are as follows6, 7

Measurements were taken at a fixed time, to avoid diurnal variations. Any obvious deformity or limb defects were not included in the present study. The height of the subject was measured by standard height measuring instrument in anatomical position. The length of humerus was taken by asking the subject to flex the elbow joint. The flexor surfaces of arm and forearm made an angle of 90 degrees. Lateral epicondyle was felt and marked with skin marking pencil. Acromion point was traced by moving finger over clavicle’s lateral end and was marked and the distance between two points was measured by spreading caliper, both side humerus length was taken. The measured length was subtracted by 2.0 mm as the acromion point is 2 to 5 mm above humeral head.

The regression equation is a linear equation of the form: y = b0 + b1x

p value (Probability that the result is true) of <0.05 was considered as statistically significant after assuming all the rules of statistical tests.

Age and anthropometric parameters distribution between males and females

Mean Average Arm Length among males was 31.55 ± 1.56 cm and among females was 30.15 ± 1.07 cm. There was significant difference in mean average arm length between males and females. 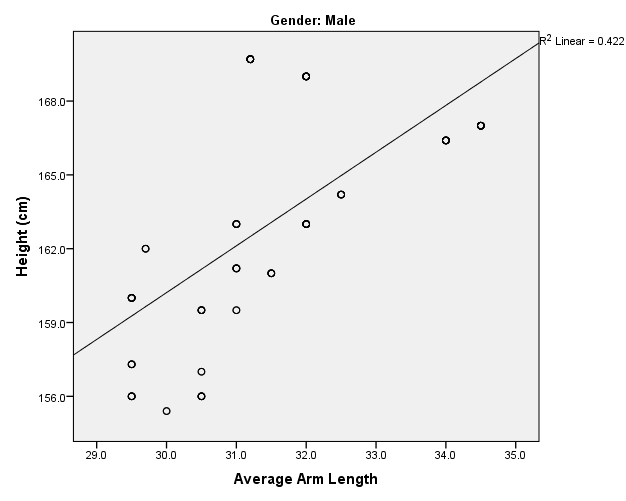 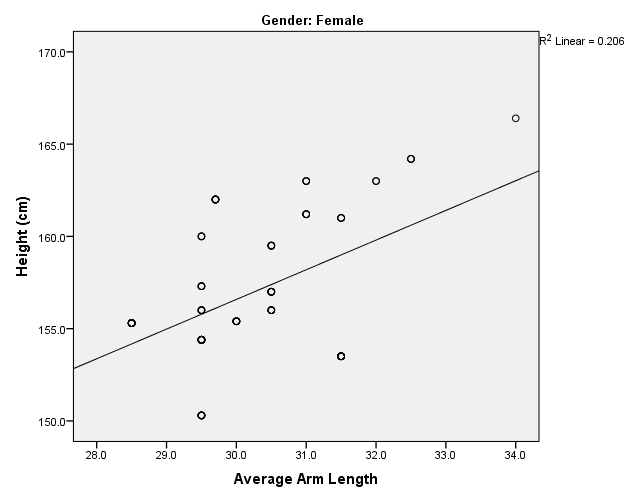 Various author in the past have shown that there is statistical significant between the height of the person and different parts of the body but mostly and majority of them had done on lower extremity of long bones, further the study on estimation of height from the long bone of the upper extremity of the body had been very sparse and very minimal data is available.

In the present study it was estimated that the average length of Male was 103.1 + 1.903 x Arm length and among female it was 108.34 + 1.608 x Arm length by using regression equation. In the study done by Borkar M P et al. 8 also demonstrated that regression equation can be used in estimating length of stature from the size of the humeurs. In studies done by Krishan and Kanchan et al. 9 also opined in their study that stature estimation can be evaluated using regression analysis method than multiplication factor method.

Further it was also established that by knowing the length of the humerus it will be possible for estimating stature of the person.

The present study enchane the known knowledge of the fact that estimation of the stature is one of the important method used in the identification of the person can be done by long bones of the upper extremities also. It will help further in the field of forensic, anatomy and even in archeological case where unknown bodies need to be examined. It is also helpful for the clinician in the treatment of proximal and distal humeral fractures. Therefore, the present study supplies the mean values of the different morphometric measurements from the humerus.