Estimation of stature or height of a person is subject to variations during life due to muscular relaxation and elasticity of intervertebral discs but could be still valuable in identification.1 Stature of an individual may reduce as age advances after 30 years due to natural senile degeneration. The stature will be reduced by 0.6mm per year after thirty. In lying posture, the length will be more by approximately 2 cm. body length lengthens after death by about 2cm. Due to relaxation of muscles and joints, but when the rigor mortis is set in, there will be not much difference in length.2 Stature estimation from dismembered body parts can be done on the basis of the ratio of the body part concerned, in relation to the entire body.1 To trace the victim’s movement and to know the background, dead victim should be identified by the police. To solve the crime, victim’s identity is very important, otherwise it is difficult to solve the crime. The identification of the dead body and corpus delicti is important before sentence is passed in murder trials.3 Among various identification data’s stature along with age and sex are considered as primary characteristics of identification.3 This process of identification is usually encountered in cases of mass disaster, assault cases where the body is mutilated to dismembered and establishment of identity of the victim poses a big challenge for investigating authorities.4 Excessive complications are faced in the burnt dead bodies where only remnants are recovered.5, 6, 7 First study of this type is conducted by Rollet in the year 1888, where he studied 50 male’s and 50 female’s corpses to show the relationship between various body measurements and the stature.8 Many studies have established the relationship between stature and hand anthropometry.9, 10, 11, 12, 13 Several authors have offered regression equations based on the length of long bones; however it is well known that formulae that apply to one population do not always give accurate results for other populations. In the previous studies conducted by scientists & researchers, it was observed that a proportions of body segment vary between the population of one place from other place which may be a cause of metamorphosis in environment, occupation etc.14 Because of different body parts response differently and ripen change in environmental conditions as well as genetics. Pearson stated that a regression formula derived for one population should be applied to other groups with caution.15 Many previous studies insisted that regression equation for stature estimation from various body measurements should be population specific. So, the present study “Formulation of regression equation to estimate stature from little finger length” is taken with the aim,

The present study was carried in the department of Forensic Medicine and Toxicology, ESIC Medical College, Kalaburagi. Total 140 students (70 males and 70 females) from ESIC Medical College, Kalaburagi were randomly selected for the study. Preliminary data like age, sex and address were noted. Height, length of both right and left little finger length of each student was measured during the time period of 2.00pm to 4.00pm to eliminate diurnal variation of height and by the same observer, using the same instrument to avoid personal error in methodology. Sufficient permissions and consents were procured before the measurements of the volunteers are taken and clearance from the Institutional Ethical committee is obtained in advance.

All volunteers, both Male and Female were selected, irrespective of their socio-economic standards. The ages of these volunteers are falling between 18 years and 25 years with no history of any sort of deformity of the hand, metabolic disorders and any developmental process. This age group was chosen because the growth of an individual ceases by this age and there is no age-related loss in body height at this age.

Subjects possessing injuries or deformities in the little finger of the hand, history of skeletal injuries, who are on any form of hormonal medications and morphologically showing the congenital malformations, Dwarfism /Achondroplasia, features of nutritional deficiencies were excluded from the studies.

The length of the little finger (RFL) of the left and right hand of each subject were measured with the aid of manual Vernier caliper, from the tip of the digit to the ventral proximal crease, where there was a band of crease at the base of the digit, the most proximal crease was used.

Stature is measured using the Stadio-meter, the subject was made to stand barefoot in the standard standing position on its baseboard. Both feet are in close contact with each other and head oriented in Frankfurt’s plane. The height was then recorded in centimeter from the standing surface to the vertex in the weight bearing position of foot.

The statistical data which are extracted from calculation are tabulated in Table 1, Table 2, Table 3, Table 4. 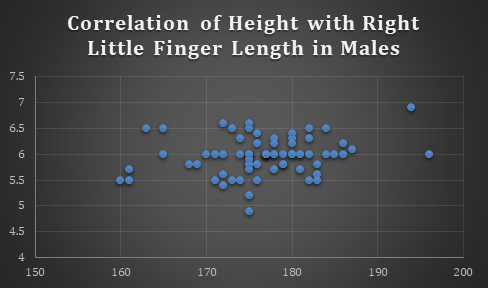 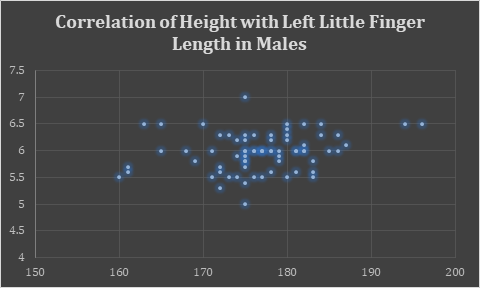 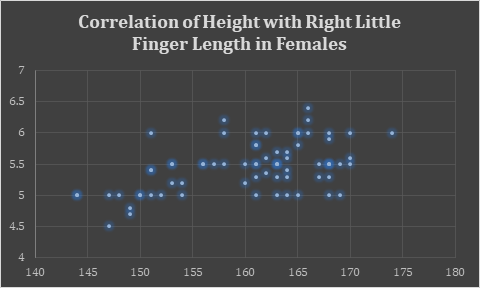 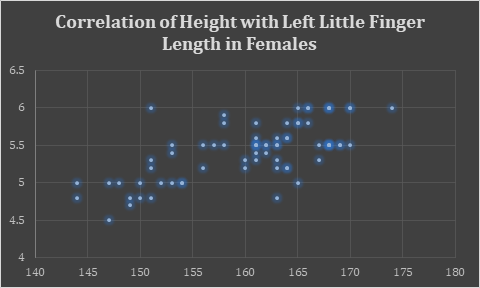 In addition to ethnic differences, secular trend and even environmental factors such as socioeconomic and nutritional status can influence body proportion. So in this study we derived a separate regression equation for male and female to estimate stature from little finger length for this region.

Authors acknowledge the immense help received from the scholars whose articles are cited and included in references of this manuscript. The authors are also grateful to authors / editors / publishers of all those articles, journals and books from where the literature for this article has been reviewed and discussed.