Vybhavi: Effect of haemoglobin deficiency on cognitive functions in elderly of Bangalore city

Context: Adequate nutrition is fundamental to healthy ageing. Among older adults with anaemia, approximately one-third have evidence of iron, folate, and/or vitamin B12 deficiency. Lower haemoglobin levels are common in older adults and frequently are measured in clinical practice.

Results: Results were compiled and statistically analyzed. The results show that Elderly with haemoglobin deficiency had statistically significant low scores in all parameters (P < 0.05), especially with executive function & processing speed.

Conclusions: It can be concluded that haemoglobin levels were associated with worse global cognitive function and greater decline in psychomotor speed and executive function.

Population aging is occurring worldwide with both the number and proportion of older adults increasing globally. Currently, there are nearly 500 million (7%) adults 65 years and older in the world, but by 2030 the older population will double to 1 billion (12%).1  Increasingly, the preponderance of older persons will reside in developing countries as fertility rates have dropped dramatically and mortality has generally decreased. For instance, there will be 370 million older adults living in China and India alone by 2030.

Adequate nutrition is fundamental to healthy ageing. Energy requirements decrease with age due to decline in lean body mass and decreased physical activity and slowed rates of protein turnover. Despite this decrease, older adults are at risk of under nutrition due to medication side effects, functional, visual, or cognitive impairment, oral disease, swallowing disorders, or loss of smell/taste, depression and social isolation, and chronic illnesses.2

Anaemia is a common, multifactorial condition among older adults. The World Health Organization (WHO) definition of anemia (haemoglobin concentration <12 g/dL in women and <13 g/dL in men) is most often used in epidemiologic studies of older adults. More than 10% of community-dwelling adults aged 65 years and older has WHO-defined anaemia. After age 50 years, prevalence of anaemia increases with advancing age and exceeds 20% in those 85 years and older. Among older adults with anaemia, approximately one-third have evidence of iron, folate, and/or vitamin B12 deficiency, another third have renal insufficiency and/or chronic inflammation, and the remaining third have anaemia that is unexplained. Several studies demonstrate that anemia is associated with poorer survival in older adults.3

Hence this study was undertaken in order to evaluate whether Haemoglobin deficiency affects cognition in elderly of Bangalore city.

In this case control study after procuring the ethical clearance, 80 elderly aged more than 60 years were recruited from an enrichment center in Bangalore. To be included in this study the subjects were 1) to have no history of Alzheimer's hepatic disorders, renal disorders, Bone related disorders, chronic systemic disorders, intake of vitamin D or calcium supplements or drugs known to influence Vitamin D metabolism and sleep, 2) Possessing Verbal communication skills necessary to understand and respond to questions, 3) to be able to care for themselves independently (Informed consent was taken from all subjects or their families if the subject was unable to read or write), 4) to be non-alcoholic and non-smokers, 5) more than High school level education. 6) H/o Diabetes mellitus, hypertension, stroke, myocardial infarction, thyroid dysfunction, and head injury. The study was done during the period of June to August 2019 which is neither winter nor summer in Bangalore city. After explaining the entire procedure, written Informed consent was obtained. General physical examination and systemic examination was done. Demographic characteristics, past medical history and use of medications were collected via structured questionnaire. Height and weight were measured, and BMI calculated using Quetlet's Index (wt in kg/ Height in m2).

Data entry and analysis was done on SPSS software version 17. Results of continuous measurements are presented in mean SD and results of categorical measurements are presented in number (%). Statistical test applied are student t test (two tailed, independent) and Pearson's Chi- square test and p value of less than 0.05 was considered as significant.

After procuring the results of serum analysis, all the parameters were tabulated, and statistical treatment was given to the data and represented in appropriate charts, graphs, and tables. Haemoglobin levels of all the subjects were measured. Based on haemoglobin levels subjects were classified into cases and controls. 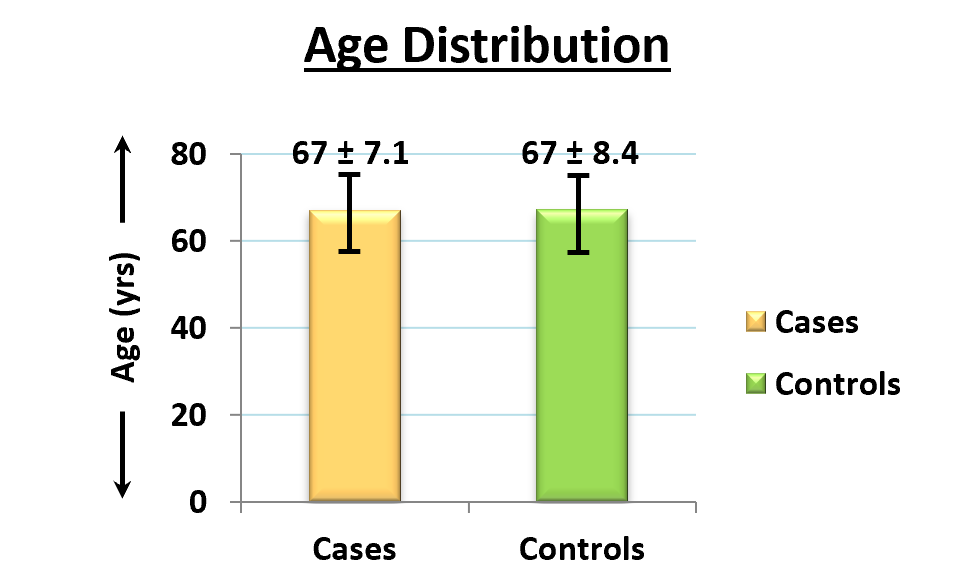 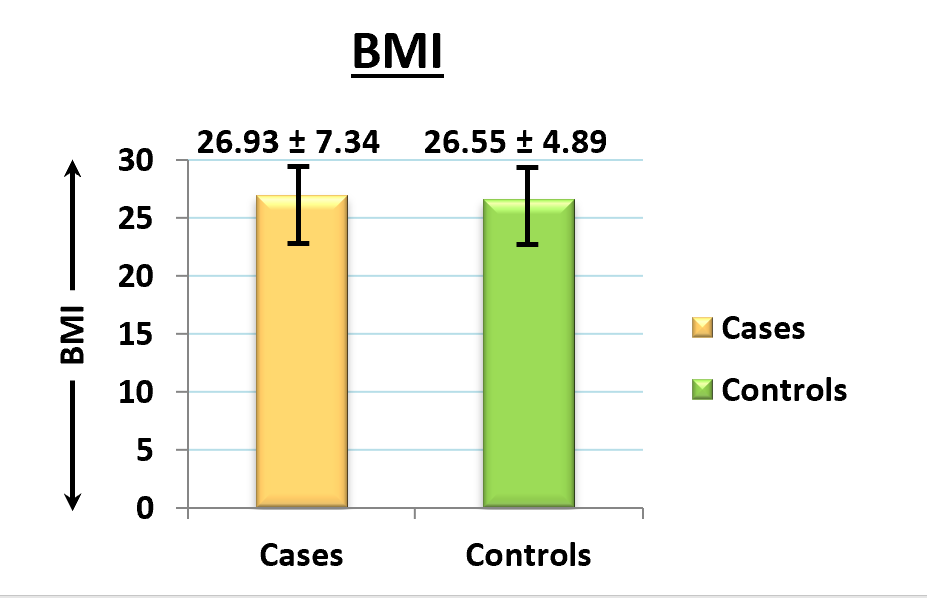 Figure 2 shows The BMI of subjects ranged from 14.46 to 52.36. Both males and females had BMI within WHO said limits of Normal to Overweight category. None of them were obese. 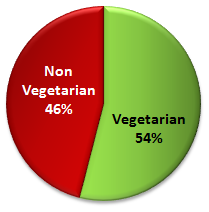 In this case control study, 80 elderly citizens of age more than 60 years who met the inclusion and exclusion criteria were recruited for the study after obtaining the ethical committee clearance. Haemoglobin levels were estimated, and all the results were tabulated, statistically treated and expressed in appropriate graphs and tables. Age distribution of participants is shown in Figure 1. The Mean ± SD age of subjects ranged from 65 to 91 years with a mean age (±SD) of 67 (±7.1) years for cases and 67 (±7.1) years for controls. Akter et al in their study have proven that Haemoglobin levels are increased in obese people. Figure 2 shows average BMI of the subjects which was 25.59 (±6.46) kg/m2. The average BMI of female subjects was 26.78 (±6.78) kg/m2 whereas the average BMI of male subjects was 23.90 (±5.48) kg/m2. Both the groups were not obese, thus nullifying one of the confounding factors that would have affected this study.Figure 3 shows the dietary habits of the subjects. There were 46% nonvegetarians and 54% vegetarians in the study. All subjects consumed the same diet every day. Moreover, the non-vegetarians in the group hardly consumed any non-vegetarian food.

The mechanisms linking haemoglobin levels to worse global cognition are not understood and will require further exploration. Low and high haemoglobin may be markers for the presence of conditions such as ischemia (via cerebrovascular disease), hypoxia (via hypoxia-inducible factor and erythropoietin levels) and/or oxidative stress (via iron dysregulation). Anaemia significantly increased the risk of stroke in middle-aged, community-dwelling individuals with chronic kidney disease, 14 and polycythemia vera, a condition associated with increased red blood cell mass, has been associated with an increased risk for cerebral thrombosis.15 Second, chronic kidney disease (associated with low haemoglobin levels) and pulmonary disease (associated with high haemoglobin levels) could result in cerebral hypoxia. Hypoxia due to pulmonary disease has been associated with decreased cognitive function in some16, 17 but not all18 case-control studies. Initial studies mainly in animal models point to chronic kidney disease19 and pulmonary disease due to smoking20 being associated with decreased production of hypoxia-inducible factor, which in turn, may reduce the production of erythropoietin. As erythropoietin receptors have been localized in the brain and seem to have a neuroprotective effect in animal models of stroke or hypoxia.21, 22 Lower erythropoietin levels may increase the risk of neuronal degeneration in certain cognitive pathways. Finally, iron dysregulation has been associated with increased brain oxidative stress.23 Iron supplementation is frequently used as a medical therapy in low haemoglobin environments, and total iron content could be elevated in high haemoglobin conditions.

In conclusion, limited yet growing literature indicates that Vitamin D deficiency is a potential risk factor for cognitive decline. Current study provides an important extension to the existing literature. Based on the results of this study, Cognition can be improved in the elderly by making them aware of the importance of nutrition and providing regular examinations checking their Serum Vitamin-D levels, and supplementing Vitamin-D to the elderly to enhance cognition and thus the quality of life.