Rana, Razdan, and Kumar: Morphometric study of human placenta and an insight into its vascular pattern by corrosion cast technique

Introduction: The placenta is a chorioallantoic, deciduate, haemochorial and villous organ. It is a vital organ which transfers vital nutrients from the mother to the foetus and removes waste products from the foetus to the mother. There has been paucity of literature regarding the morphometric study of human placenta and its vascular pattern (magisterial or dispersed) by corrosion cast technique. Therefore, the present study was conducted on morphometry and vascular pattern of the human placentae.

Aim: To do the morphological and morphometric study of placenta and to study the vascular pattern of placenta by corrosion cast technique.

Materials and Methods: Study was done on 43 placentae and its morphometric study and vascular pattern were studied by corrosion cast technique.

Conclusion: The vascular cast preparation of placentae in our study will further help in contribution towards the understanding of the placental vasculature. An effort should be made for performing more studies on placentae of complicated pregnancies eg: hypertension and diabetes etc.

Placenta represents an extremely intimate parabiotic union of maternal and foetal tissues for the inevitable requirement of the embryo. Human placenta is an important organ for maintaining the pregnancy and normal foetal progress. Foetal outcome is adversely affected by pathological changes observed in placenta. The placenta is a chorioallantoic, deciduate, haemochorial and villous organ. It is a vital organ which transfers vital nutrients from the mother to the foetus and removes waste products from the foetus to the mother.1 In intrauterine life, foetus depends upon the placenta for nutrition which function as its lungs, liver & kidney.2 The wellbeing of the foetus depends on many factors, but healthy placenta is the single most common factor in producing a healthy baby.3 The placenta acts as a unique organ in higher mammals which is attached to the uterus and the foetus via umbilical cord. The observation of the placenta in utero or postpartum, gives an important information regarding condition of the foetal wellbeing.4, 5, 6 An abnormal development had adverse impact on the foetus and results in various types of complications such as maternal hypertension, gestational diabetes and intrauterine growth retardation etc. Vascular casting technique is most common way for investigating the various diseases.7, 8 To examine the three-dimensional structure of blood vessels, ductal system, and cavities of organ, corrosion cast is found to be a well-established technique. Well-prepared cast provides a unique tool to have an in-depth knowledge of the organ and tissue as they replicate the vasculature and ductal system anatomy.9 The vascular corrosion casting technique produces a replica of the vascular beds by injecting a plastic polymer that fills the blood vessels and rapidly polymerizes followed by corrosion of adjoining tissues with alkali solutions. After washing and drying, the hardened cast represents the geometry of the original vascular system.10 There has been paucity of literature regarding the morphometric study of human placenta and its vascular pattern (magisterial or dispersed) by corrosion cast technique. Therefore, the present study was conducted on morphometry and vascular pattern of the human placentae.

The aim & objectives of the present study were as follows:

The present study was conducted in the Department of Anatomy. 43 placentae were procured from Department of Obstetrics and Gynaecology of Medical College & Associated Hospital. Approval was taken from the institutional ethical committee before the start of the study and the informed consent was taken for procurement of placenta from patients or their husband. This study was done for one year i.e. from November 2018 to November 2019. Out of 43 placentae which were taken for this study, 28 were from uncomplicated pregnancy and 13 were from complicated pregnancy having gestational hypertension and diabetes.

Trimming of membrane was done. Specimens were washed under running tap water to remove the clot and debris on the surface and all the blood in the blood vessels was squeezed out. The vessels were then infused with 5000IU Heparin to avoid clots formation in the umbilical vessels.

With the help of disposable syringes attached to plastic cannulas, the casting material was injected into the vessels according to the colour code (red for arteries and blue for veins). The injection was continued until the resistance was felt. The cannulas were removed, and the blood vessels were clamped and ligated. After that the placentae were kept in a refrigerator at a temperature of <20 degree Celsius for 3 to 4 days to allow the casting material to solidify. The specimen was immersed in KOH (corrosive agent) to dissolve the placental tissue, leaving behind the cast model of the placental vasculature. After the formation of placental vascular cast model, three type of placental vascular pattern were observed that is Disperse (Dichotomous), Magisterial (Monopodial), and Mixed. The diameter of umbilical vessels was also measured one at the entrance, second at their 1st bifurcation and also at the end with the help of vernier calliper. Besides that, the number of bifurcations were also counted.

At the end of the study, the data was collected and analysed statistically by using SPSS v. 17.0. A p value <0.05 was considered as significant. 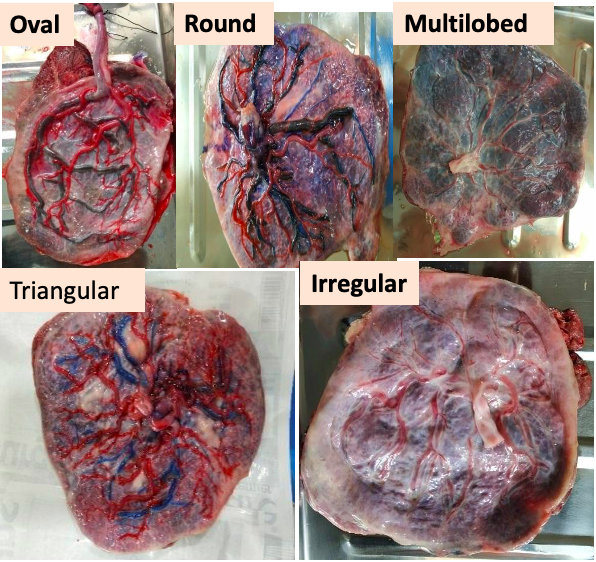 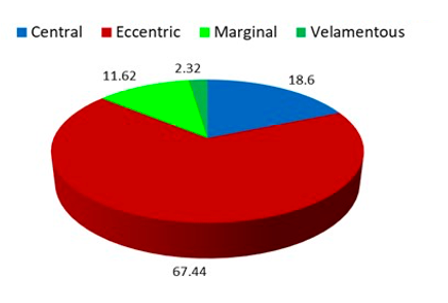 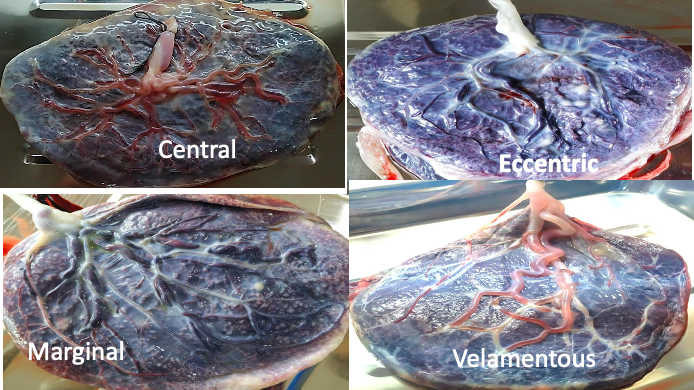 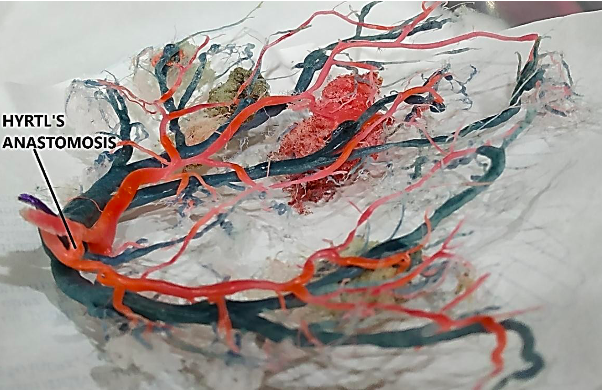 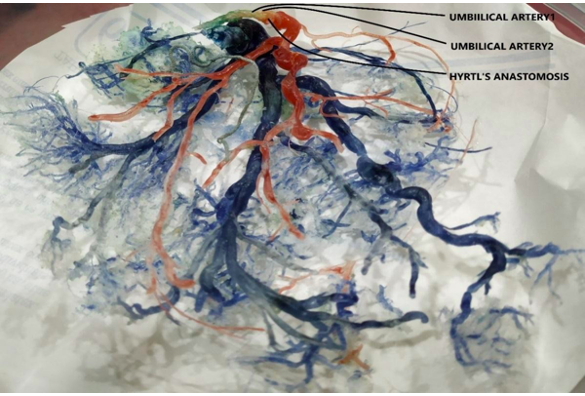 Relationship between shape and vascular pattern of placentae

Relationship between shape, vascular pattern of placenta and U.C. insertion in abnormal cases

Relationship between shape and vascular pattern of placentae (Table 1)

Relationship between shape, vascular pattern of placenta and U.C. insertion in abnormal cases is shown in Table 2.

Diameter of main umbilical vein and its first bifurcation along with maximum and minimum end vein diameters.

Number of bifurcations of placental blood vessels in uncomplicated pregnancies

Number of bifurcations in complicated pregnancies

The present study was conducted to assess the morphometry of the placentae i.e. weight, shape, diameter and thickness (both central and peripheral). Besides that the type of umbilical cord insertion and number of blood vessels in the cord were also studied. Corrosion cast of placental blood vessels were prepared and their vascular branching pattern, vascular bifurcations, vascular diameter of main umbilical artery 1 & 2, main umbilical vein along their first bifurcations and diameters of end blood vessels were studied.

A large doubt is still present in the placental vascular pattern among different studies. So, we studied the vascular pattern by corrosion cast method for better understanding. The structural organization of the chorionic vasculature was analyzed from cast models of placentas. The models were generated by the corrosion technique using a dental polymer. Fetoplacental vasculature is composed of large vessels that branches from the umbilical vessels at the umbilical insertion and traverse the chorionic plate. Smaller arteries branch from the chorionic vessels and enter the placenta to constitute the cotyledon vessels or the intra placental vessels that perfuses the cotyledons. The branching pattern of chorionic vessels was defined as disperse for a branching network that courses from a central cord insertion, and magisterial for branching vessels that course from a marginal cord insertion to the opposite edge. Classification of the chorionic arterial network was performed using the dichotomous and monopodial branching pattern. The dichotomous pattern defines a symmetric network of bifurcation in which each vessel branches into new fairly similar daughter vessels. The monopodial network defines a network for vessels in which a main, long mother tube courses for a long distance with an almost constant diameter, with small diameter daughter tubes branching off to the sides. The placental casts demonstrated that umbilical cord insertion was located anywhere between the center and the margins of the placenta. For the central insertion the dichotomous patter was dominant, whereas for a marginal insertion the monopodial pattern was dominant. We observed the Hyrtl anastomosis in all of the casts which connects the umbilical arteries within the placenta at 5mm from the cord insertion. When one umbilical artery was injected with the red colored casting materials, the same was entering the 2nd umbilical artery via a connection between both the umbilical arteries known as Hyrtl anastomosis. The cast models of this study demonstrated very well the Hyrtl anastomosis between the umbilical arteries (Figure 6).

The diameter of the placental blood vessel cast was measured by vernier caliper. Mean diameter of main umbilical artery 1 and 2 was 4.20 mm and the maximum and minimum diameter ranged between 2mm -7 mm & 0.25mm -6.8 mm, respectively.

Sarojamma Morphological and histological study of the placenta1986758