Kumar M and Venkatesh D: A comparison of pain and disability scores in different grades of knee OA before and after low level laser therapy (LLLT)

Introduction: Osteoarthritis of knee (KOA) is the most common cause of morbidity in the elderly. As the knee joint is involved in weight- bearing, aging causes wear and tear of cartilages in the knee joint resulting in degenerative changes. Kellgren-Lawrence grading of knee OA are described according to the findings noted on the X-ray of Knee Joint. Low-level laser therapy in the management of knee osteoarthritis. The assessment of pain and disability in subjects with grade II and grade III KOA before and after the low-level laser therapy was done using the questionnaires.

Materials and Methods: Forty-five Subjects who are symptomatic and who had radiological criteria based on Kellgren-Lawrence (KL) grade II and III were included in the study. Visual analog scale (VAS), Western Ontario and McMaster Universities Arthritis Index (WOMAC) and Lequesne index of pain and disability was used before and after low level laser therapy in the subjects of the study.

Conclusion: Lequesne index had a smaller number of question when compared to WOMAC and more specific questions when compared to VAS. The questionnaire is specific to assessment of progression of functional status of the individual in grade III knee OA.

Osteoarthritis of knee (KOA) is a classic age-related degenerative disorder. It is a chronic degenerative disease considered an inevitable consequence of aging. KOA is the most common joint disorder in the world and one of the most common cause of pain and disability in the elderly. Early onset KOA is also more common who lead physically active lifestyles, athletes and workers in occupations that involve exposure to traumatic injury or mechanical stress.1 The diagnosis of the KOA is mainly done through the assessment of symptoms and clinical examination. In order to access the severity of the KOA questionnaires are administered. The investigations like x-rays, magnetic resonance imaging, joint fluid analysis, electromyography and serum inflammatory markers assay are done to grade the severity and check the prognosis of disease. Kellgren-Lawrence grading of KOA are described according to the findings noted on the X-ray of Knee Joint.2

In view of managing pain and disability, subjects consume medications on a daily basis which could lead to further complications or side effects of the medications. Cost and risk of surgery which considered as definitive treatment involves financial burden on elderly. Hence there is a need for a cost-effective method of treatment for patients with knee osteoarthritis.3

The laser light of particular frequency is used which can penetrate the tissues around the joint. It causes vasodilatation, reduction in pain and inflammation around the joint. Low-level laser therapy in the management of knee osteoarthritis was done in this study.4 The assessment of symptoms before and after the low-level laser therapy was done using the questionnaires.

The study was done in M S Ramaiah Medical College and Teaching Hospitals. Study participants were in the age group of 45-75 years who had clinically diagnosed knee osteoarthritis. Institutional scientific and ethical committee approval was obtained. Procedure was explained to the participants and written informed consent was obtained.

Forty-five Subjects who are symptomatic and who had radiological criteria based on Kellgren-Lawrence (KL) grade II and III were included in the study. Subjects with KL grade I and IV, infective arthritis, history of vascular diseases in the lower limb, photosensitivity, and patient on steroid therapy were excluded from the study.

Visual analog scale (VAS) was used to assess pain perception for every session of laser therapy. Weekly average of VAS was taken to access the pain perception in the individual. The 10-point numeric scale ranges from '0' representing one pain extreme (e.g. “no pain”) to '10' representing the other pain extreme. Scores range from 0-10 points, with higher scores indicating greater pain intensity. Subjects asked to report pain intensity “in the last 48 hours” or an average pain intensity. VAS is considered the reliable and valid tool in capturing the pain intensity in subjects with chronic pain.

Modified WOMAC (CRD- Pune version) consists of 27 questions in four different categories: Pain (5 questions), Stiffness (2), Difficulty range (17 questions) and optional 3 questions. Each question has five responses starting from none, mild, moderate, severe and extreme: 0 – 4 on Likert scale. The scores for each subscale were added. Score range is 0-20 for Pain, 0-8 for Stiffness, and 0-68 for Physical function. Total scores were 96 without optional questions and severity increases as the scores increased.

Severity index of Lequesne (algo-functional index) is the questionnaire which is specific for knee OA. It is used for assessing the prognosis. There are 3 sections for this index: (1) pain or discomfort, (2) maximum distance walked and (3) activities of daily living. Scoring is given for items under these sections. Index of severity was obtained by adding the scores for all parameters. Interpretation is done based on the minimum points for each section is 0, maximum points for each section are 8, minimum index score is 0, and maximum index score is 24. Severity increases as the scores increases. Total score of 0 is no disease/handicap, 1-4: mild handicap, 5-7: Moderate, 8-10: Severe, 11-13: Very severe, ≥14: extremely severe.

Low level laser therapy (LLLT) was administered using a laser device with probe giving maximum power output of 10 mw, with a wavelength of 810 nm. LLLT was given with the laser probe around the 6 points around the surface of the affected knee joint. The dosage at each point was 1.5 J for the duration of 60 seconds and thus the total dosage administered per session was 12 J. The therapy was given on alternate days or 3 times a week for the duration of 3 months. Patients with both limbs with KOA, therapy was given to both the limb accordingly.

Subject was asked to sit on the couch with leg freely suspended down. Laser probe was placed in the skin surface of the knee joint and machine switched on with safety key available on the probe. The power key is kept pressed until the treatment time. 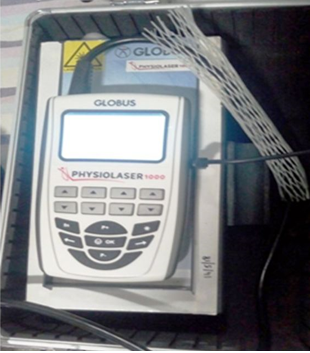 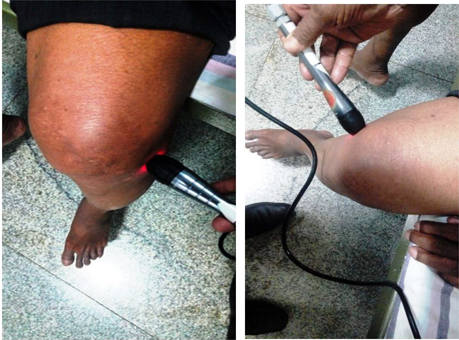 Total participants were 45 subjects in the study. Among the participants 30 had grade II knee OA and 15 had grade III KOA. The baseline parameters for the subjects are mentioned in the Table 1. There groups were comparable and there is no significant difference between the two groups.

The pain scale considered was visual analog scale (VAS). The scores are mentioned in the Table 2. There is no statistical significant difference between the grade II and grade III KOA.

The WOMAC scores are mentioned in the Table 3. There is no statistical significant difference between the grade II and grade III KOA participants.

Osteoarthritis of knee (KOA) is the most common cause of morbidity in the elderly. As the knee joint is involved in weight- bearing, aging causes wear and tear of cartilages in the knee joint resulting in degenerative changes.

Knee osteoarthritis is more common among women than men which is observed in this study. This is because of the reasons that females lead more physically active lifestyles, in the household activities and various other activities such as athlete and as workers in occupations that involve exposure to traumatic injury or mechanical stress. Another reason could be that the cartilage of knee in women have a reduced thickness and more reduced volume of cartilage in the knee than men.6

Body mass index of the study participants were higher than the normal values of 25 kg/m2. Overweight is considered to be one of the major risk factors getting knee osteoarthritis. This is also seen is several studies like Kulkarni et al. 2016,7 which describes that obesity and overweight are the risk factors for the development of knee OA by increasing the load on knee joint and this causing early degenerative changes.

Duration of knee OA and grades on the Knee OA are directly proportional. It is seen in our study the mean duration of knee OA in grade 3 is more when compare to grade 2. This means the participants have been through the earlier stage and have not been able to arrest the progression. The duration and severity of the disease is reported in studies like Orita et al.8 2011. KL grading system with x-ray seems to well correlating with the disease progression and severity.9, 10

The Western Ontario and McMaster Universities Arthritis Index (WOMAC) is widely used in the evaluation of hip and knee osteoarthritis. The WOMAC, which is a pain index measurement for OA, is the most widely used parameter for knee joint function and also a tool for evaluating disorders related to OA of the lower extremities. The disease-specific tool is of use in clinical evaluation of changes in pain-related health status and clinical outcomes.11, 12 It describes not only pain but also the functional status including the daily activities of an individual. In this study it is observed that there is no statistically significant difference in the changes in the scores of WOMAC between grade II and grade III Knee OA. Similar finding with WOMAC was reported in the studies like Goggins et al. 2005, where the use of WOMAC as tool to screen the subjects with knee OA was studied.13

Lequesne index also called as functional index is most commonly used tool to study knee OA. 14 In this study there is statistically significant difference in the Lequesne index in subjects with grade III knee OA. This is suggestive that Lequesne index can differentiate the functional status or pain and disability between the grade II and grade III more effectively than other pain scales used in this study. In a study by Sander et al. 2020, there is description of the use of Lequesne index and its risk factors as knee OA.5

LLLT uses a process called photobiomodulation to change the condition of damaged tissues by stimulating cellular metabolism, thereby accelerating the healing process. Several mechanisms underlying therapeutic effects with LLLT have been suggested. These include Increased ATP production by the mitochondria, increased oxygen consumption at the cellular level, increased serotonin and endorphins production, increased anti-inflammatory effects through reduced prostaglandin synthesis. Mechanism of action of LLLT can be summarized as follows. LLLT once administered on surface it penetrates the skin and get absorbed by the deeper tissues. This releases photons into the mitochondria which are form of light energy. Photons dissociate inhibitory nitric oxide from the enzyme from mitochondria, leading to an increase in electron transport, mitochondrial membrane potential and ATP production. After the initial photon absorption events, numerous signaling pathways are activated via reactive oxygen species, cyclic AMP, NO and Ca2+, leading to activation of transcription factors.5, 15, 16 These changes cause analgesic effect and tissue repair in the cartilage, overall leading to symptomatic improvement.

The limitation of the study is that the comparison had to be done more subjects of grade II and grade III KOA. The mechanism of LLLT action is not studied in detail in this study.

Lequesne index had a smaller number of question when compared to WOMAC and more specific questions when compared to VAS. The questionnaire is specific to assessment of progression of functional status of the individual in grade III knee OA.