Sawant and Rizvi: Cadaveric study of an accessory lobe of liver and its clinical significance

The complexity of liver function and its importance to life has encouraged many anatomists to study the morphological features of the liver in great detail. Despite recent technological advances like CT, MRI and USG, detailed study of the cadaveric liver can still contribute to identification of important anatomical variations.

The liver can present a number of congenital anomalies. More common among them are the irregularities of the shape and the number of lobules. The less common variations include the presence of accessory lobes or accessory livers. The accessory lobes may be attached to the liver through a mesentery or a bridge of the hepatic tissue and they are usually asymptomatic. An accessory liver lobe is a very rare occurrence and when it exists, it becomes clinically important because of its rarity.

Materials and Methods: A study was conducted in the Department of Anatomy of K. J. Somaiya Medical College in which 50 liver from donated embalmed cadavers were examined for the presence of accessory lobe. Only cadavers, whose clinical history excluded liver diseases, were used for the study.

Results: 10% specimens showed accessory lobe. All are present on the under surface of liver.

Clinical Significance: Among the less common abnormalities, are the formations of accessory lobes. Accessory lobes may carry the risk of torsion.

Conclusions: Knowledge of the presence of a small accessory lobe of the liver near the porta hepatis is useful for surgeons and radiologists in diagnosing, surgical planning and avoiding iatrogenic injuries of the accessory lobe.

The liver is a magnificent organ of re-generation besides being the largest gland of the human body measuring about 1.5 to 1.8 kgs (accounting for approximately 2% to 3% of total body weight of an individual). It is also the second largest organ of the human body (first being skin). Its function is mainly secretion of bile, metabolism and detoxification. The liver is one of the first organs to develop in the embryo.1 It is situated in the right upper quadrant of the abdomen and lies under the right dome of diaphragm. It is a wedge shaped organ being concave inferiorly, where it is moulded to the shapes of the adjacent viscera. It occupies the right upper quadrant of the abdomen, mainly the right hypochondrium and epigastrium with the left lobe extending into the left hypochondrium. On account of its multidimensional functions, liver is considered to be a vital organ of the body and is necessary for survival. An average adult liver weighs around 1.5 kg.2 It measures around 21-22.5 cms across its widest point, 10-12.5 cms from front to back and 15-17.5 cms in its maximum vertical height.1 The liver is divided into the right and left lobe by the falciform ligament on the anterior and the superior surface and by the ligamentum venosum and ligamentum teres on the visceral surface. Two additional lobes are seen on the visceral surface, the caudate and the quadrate lobe separated by a transverse fissure called as porta hepatis. The inferior vena cava separates these two lobes from the right lobe. Each lobe of the liver consists of lobules, in the centre of which lies the central vein. These unite to form hepatic veins which open into the inferior vena cava.

The size of liver, either in clinical examination or in imaging techniques, depends on several factors such as age, sex, body size, and shape, and the particular examination technique utilized. In some cases, the liver can be palpable due to anatomic reasons or underlying abnormal conditions.2

To study the morphology of liver to document the presence of accessory lobe useful for Surgeons and Radiologists.

50 adult human livers were obtained from donated embalmed cadavers (42 male & 8 female) in the Department of Anatomy at K. J. Somaiya Medical College, Sion, Mumbai, all ranging between age groups of 65 to 75 years. Only cadavers, whose clinical history excluded liver diseases, were used for the study.

We observed a accessory lobe in 5 livers. They were situated in the posterior part of the fissure for ligamentum teres, close to the porta hepatis. The lobes were triangular in shape and about one inch in width. They were attached to the left anatomical lobe of the liver through a vascular pedicle which contained the branches of hepatic artery, portal vein and hepatic duct. Microscopic structure of the accessory lobe showed normal liver architecture. 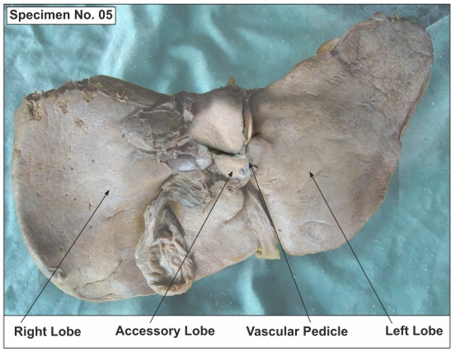 Showing photographic presentation of the accessory lobesituated in the posterior part of the fissure for ligamentum teres, close to the porta hepatis 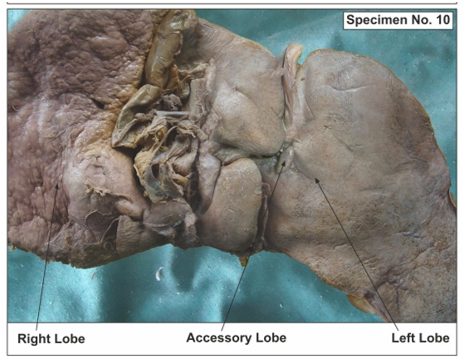 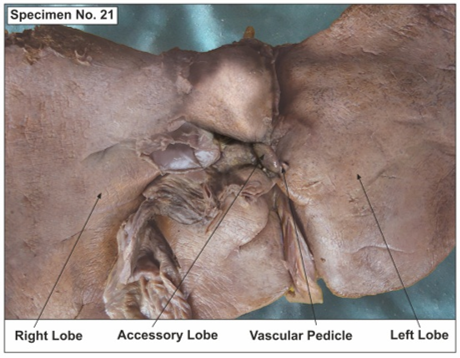 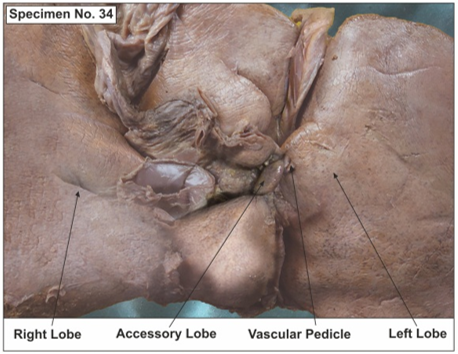 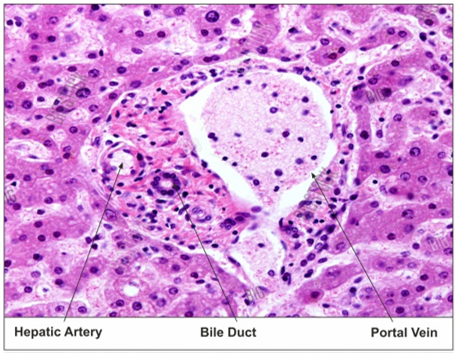 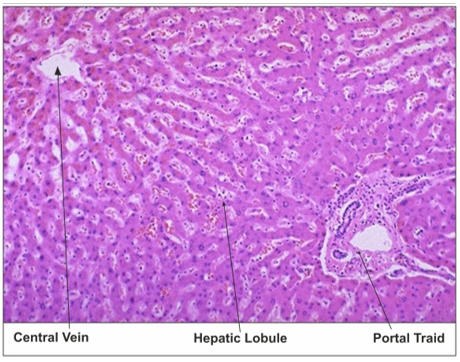 The presence of accessory liver lobes is one of the rarest variations. As gleaned from literature among the accessory lobes, Reidel’s lobe is the commonly occurring variation.3 Riedel lobe of the liver is a simple anatomical variation, a downward tongue-like projection of the anterior edge of the right lobe of the liver to the right of the gallbladder and it rarely produces any symptoms.4

The accessory lobe which was documented in present study belonged to Type VI.

In the present study the duct of all the accessory lobes of 5 specimens drain into an intra–hepatic bile duct hence it belonged to Type I.

The accessory lobe which is being reported here is surgically and radiologically very important due to its small size and the presence of a vascular pedicle. Due to the small size, it might be mistaken for a lymph node. It might be accidentally removed during the surgeries in and around the porta hepatis. A damage to the lobe or its vascular pedicle might result in bleeding into the abdominal cavity. Accessory lobes need attention when there is torsion of the vascular pedicle or metastasis occurring in them. Torsion of the accessory lobes is a surgical emergency.6, 7

An accessory lobe could be formed by the displacement of the primitive rudiment of the organ, or by persistence of the mesodermal septa during its proliferation.8 Its presence occurs due to an error in the formation of the endodermal caudal foregut and segmentation of the hepatic bud in the third month of the intrauterine life.9

Knowledge of the presence of a small accessory lobe of the liver near the porta hepatis is useful for surgeons and radiologists in diagnosing, surgical planning and avoiding iatrogenic injuries of the accessory lobe.

The authors declare that they have no competing interests.

Authors are thankful to Dean Dr. Varsha Phadke Madam for her support and encouragement. Authors also acknowledge the immense help received from the scholars whose articles are cited and included in references of this manuscript. Authors are also thankful to the teaching and non-teaching staff of Anatomy Department. The authors are also grateful to authors / editors / publishers of all those articles, journals and books from where the literature for this article has been reviewed and discussed.