Rajan: Study of variations in the anterior half of the circle of Willis using magnetic resonance angiography

Aims: The aim of this study was to study the variations in the formation of the anterior part of the circle of Willis using Magnetic Resonance Angiography (MRA), and to review the embryological and clinical perspectives.

Materials and Methods: The study was conducted over 18 months in the department of Anatomy in collaboration with the department of Radio-diagnosis at Pushpagiri Institute of Medical Sciences and Research Centre, Tiruvalla. MRA study was performed on 215 images, which were obtained from the electronic database at the Department of Radio-diagnosis. All the circles were further categorized into complete and incomplete, and analyzed with regard to each of the components of the anterior part.

Results: In this study, it was observed that the entire circle was complete in approximately 62.79% of the total, the anterior part being complete in 200 images with 86 of them showing textbook configuration.

Conclusion: The incidences of variations were observed to be higher on the right side than on the left. The most frequent variation was hypoplasia of A1 segment of ACA in the anterior part of the circle of Willis.

In the anterior part, the anterior cerebral artery (ACA) arises from the medial aspect of the internal carotid artery bifurcation, below the anterior perforated substance, at the medial end of the stem of the lateral sulcus. It courses antero-medially towards the inter-hemispheric fissure, separated by the falx cerebri, above the optic chiasma or optic nerve. At the level of the inter-hemispheric fissure, it is joined to the contralateral anterior cerebral artery via, the short transverse anterior communicating artery (ACoA) in the supra-chiasmatic cistern.

To understand the variants in the circle of Willis observed during cerebral angiography, an understanding of its development is essential. The embryological development of the cranial arterial vasculature in its adult form evolves in early foetal life through a number of simultaneous/ overlapping steps. The third aortic arch is the precursor5, 6 of the primitive internal carotid artery, which gives off cranial and caudal divisions that form the anterior cerebral and posterior communicating arteries respectively (also giving off anterior choroidal and middle cerebral arteries).

There are considerable individual variations in the pattern and calibre of vessels that make up the circulus arteriosus. The cerebral and communicating arteries may be individually absent, variably hypoplastic, double, or even triple. Widespread clinical interest in the arterial circle is due to its propensity for variations relevant for neurosurgical, vascular and radiological interventional procedures especially with regard to cerebrovascular accidents.

The study design is an observational descriptive study over a period of 18 months conducted by the department of Anatomy in coordination with department of Radio-Diagnosis at Pushpagiri Institute of Medical Sciences & Research Centre, Tiruvalla. The investigative modality for the study was magnetic resonance angiography (MRA) of the brain. Cerebral imaging was performed on a 1.5T MRI machine including axial T1, T2, and FLAIR (fluid attenuation inversion recovery) weighted sequences. Circle of Willis MRA was performed using three-dimensional (3D) time-off flight (TOF) sequence. The original MRA sequence for each patient is retrieved from an electronic database (DXMMR). The 215 subjects for the MRA study were taken up from those availing this investigation as part of their clinical workup or follow-up at the institute, on in-patient or outpatient basis. All MRAs of brain conducted in the institution on adults of both sexes in the age group between 18 and 90 years were included in the study. Those excluded were images with evidence of Neurosurgical interventions (AVM repair, shunting), known or diagnosed cases of vasculopathies such as arteritis, and known craniofacial anomalies and genetic disorders.

In the present study of angiograms of 215 consecutive subjects who underwent MR angiography at our institute, the number of morphologically complete circle of Willis was 135 (62.79%). The textbook type Circle of Willis with complete anterior and posterior circulations was observed in 86 images (40% of total images); this formed 63.7% of the complete arterial circles. Incomplete arterial circles comprised 80 of the total 215 images (37.21%). The anterior circulation was functionally complete in 200 images, of which 86 had textbook configuration.

The variations observed in the A1 segments of right and left anterior cerebral arteries have been compiled as follows:

Incidence of variations in Right and Left A1 segments

Incidence of variations in ACoA in 215 images

ACoA appeared fenestrated in eight cases, and was duplicated in one MRA. The artery was totally absent in one image. 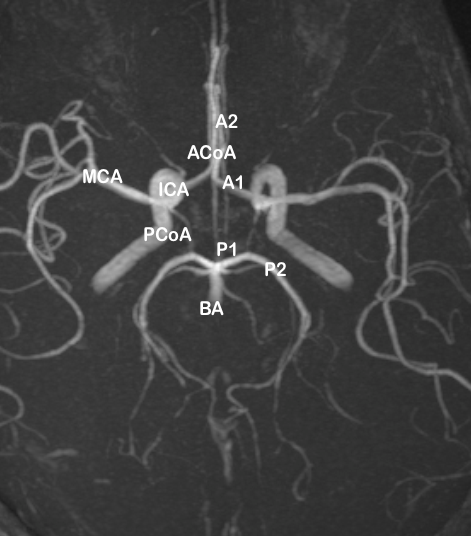 MRA image showing an incomplete circle of Willis (both anterior and posterior parts). In the anterior part, A1 segment absent on right side 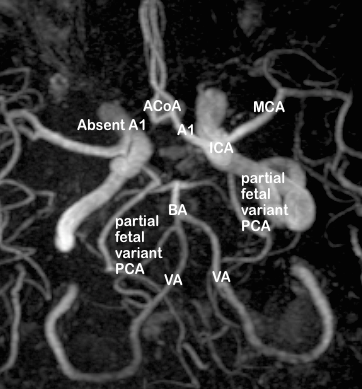 Incomplete circle of Willis: absent left A1 (dotted circle) in the anterior part 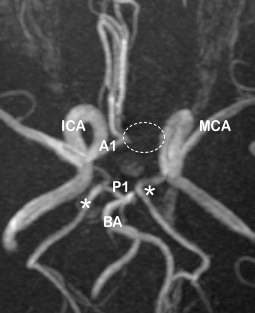 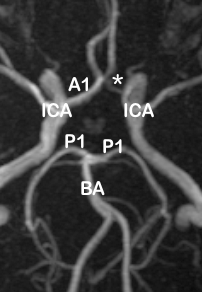 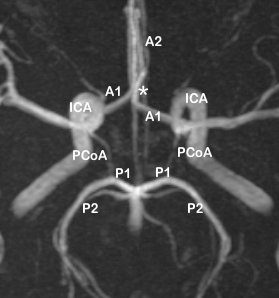 MRA image of circle of Willis showing duplication of right A1 (*) 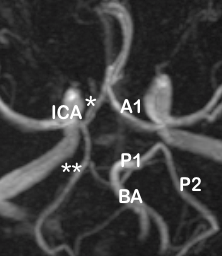 Over the last three hundred years, many studies and case reports have been published regarding the cerebral arterial circle or circle of Willis (CoW). The early studies were mostly cadaveric dissection studies, the largest of those being on 994 brain specimens by Riggs and Rupp7 in 1963. The introduction of radiological imaging for visualizing the circle of Willis came during the 1980s, initially using conventional cerebral angiography, and later by CT angiography and MR angiography.

The ACoA was studied in 100 formalin fixed brains by Kardile et al.9 in 2013, with 38 variations reported. The most common variation was duplication (10), with absence of ACoA (8) and fusion (3).

The MR angiographic images in the present study were divided into anterior and posterior parts (Figure 7), and sub-classified into complete and incomplete variants.

Division of circle of Willis into anterior and posterior parts

The distribution of the types of variants in the anterior part of the circle of Willis, as observed in the present study, is tabulated in Table 3.

Distribution of variants in anterior CoW in MRA

In the present study, the observed patterns of variations in the anterior part of the circle of Willis were classified into six patterns (Figure 8) as follows:

Type B: Presence of two or more ACoAs

Type D: Point fusion of both A1 segments; no visible ACoA segment

Type F: Unilateral absence or hypoplasia of A1 segment

In the above classification of the MRA images in the present study, types A-D is considered as complete, and types E-F are considered as incomplete.

In the anterior part of the circle of Willis, the normal complete pattern (type A) was observed in 60.46% of cases. However, the highest incidence of variation was seen with absence or hypoplasia (type F) of unilateral A1 segment (right and left both inclusive) in 25.88% of MRA, and this accounts for a higher incidence of incomplete anterior CoW. Fused (short segment) ACA (type D) was observed to rank as the second commonest variation with a 10.7% incidence but as the arterial pathway was essentially intact, it was categorized as complete.

In order to explain the occurrence of the variations, it is necessary to review the embryogenesis of these vessels. The development5, 6, 10, 11, 12, 13 of the cerebral arteries begins at approximately five weeks of gestation, and the primitive ICA (which arises from the dorsal aorta except the first segment which comes from the third aortic arch) is vital to the normal development of the brain and surrounding structures, being the embryologic precursor to the ACA, PCoA and MCA. In the 04 mm embryo, the carotid system supplies the forebrain and contributes to perfusion of the hindbrain through the primitive segmental arteries. In the 31-day embryo, all blood supply to the cerebrum comes from the ICA.

According to Padget,5, 6, 10 the development of anterior cerebral circle is due to the initial development of numerous arteries from the primitive ICA to supply the forebrain, followed by the regression of certain arterial segments in utero and in adult life. In foetal life, there are three ACAs connected by an anterior communicating plexus; the third (or middle ACA) and the communicating plexus should normally regress, and failure to do so results in anatomical variants such as duplication of ACA, or duplication of ACoA. Conversely, the vessel segments that should persist may abnormally regress, causing hypoplasia/ absent ACoA or hypoplasia/ absent ACA. In the event of a cerebrovascular accident (such as stroke) affecting the anterior circulation, hypoplasia or absence results in significantly reduced collateral supply, and hence leads to an increased risk for larger area of cerebral ischaemia.

DH Padget Designation of the embryonic intersegmental arteries in reference to the vertebral artery and subclavian stemAnatomical Rec195411933495610.1002/ar.1091190306