Rajan: Study of variations in the posterior part of the circle of Willis using magnetic resonance angiography

Aims: The aim of this study was to study the variations in the formation of the posterior part of the circle of Willis using Magnetic Resonance Angiography (MRA), and to review the embryological and clinical perspectives.

Conclusion: The incidences of variations were observed to be higher on the right side than on the left. The most frequent variation was the partial foetal variant of posterior cerebral artery (PCA) in the posterior part of the circle of Willis.

Circulus arteriosus/circle of Willis1 is an arterial anastomosis at the base of the brain that unites internal carotid [ICA] and vertebro-basilar systems. Anteriorly, anterior cerebral arteries [ACA] are connected by Anterior communicating artery [ACoA] and posteriorly, the posterior cerebral artery [PCA] of each side (from basilar) is joined to ipsilateral ICA by posterior communicating artery [PCoA].

In the posterior part of circle of Willis, basilar artery runs cephalad in pre-pontine cistern and terminates at the level of inter-peduncular cistern by bifurcating behind dorsum sellae into two posterior cerebral arteries [PCA]. PCA pass postero-laterally in circum-mesencephalic cistern, winds around cerebral peduncle and reaches above the tentorial surface, parallel with superior cerebellar artery and receives Posterior communicating artery [PCoA], a branch of C7 (communicating) segment of ICA.

Clinically, this arterial ring has claimed widespread interest due to its propensity for variations relevant for neurosurgical, vascular and radiological interventional procedures especially with regard to cerebrovascular accidents. 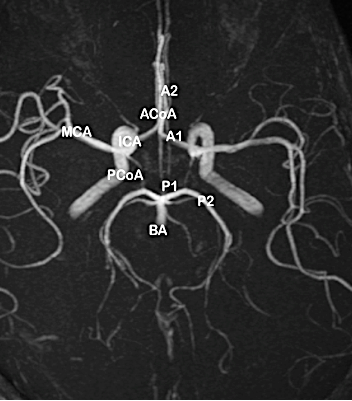 The study design is an observational descriptive study conducted by the department of Anatomy in collaboration with department of Imaging & Radio-Diagnosis at Pushpagiri Institute of Medical Sciences & Research Centre, Tiruvalla. The investigative modality for the study was magnetic resonance angiography (MRA) of the brain. Cerebral imaging was performed on a 1.5T MRI machine including axial T1, T2, and FLAIR (fluid attenuation inversion recovery) weighted sequences. Circle of Willis MRA was performed using three-dimensional (3D) time-off flight (TOF) sequence. The original MRA sequence for each patient is retrieved from an electronic database (DXMMR). The 215 subjects for the MRA study were taken up from those availing this investigation as part of their clinical workup or follow-up at the institute, on in-patient or outpatient basis. All MRAs of brain conducted in the institution on adults of both sexes in the age group between 18 and 90 years were included in the study. Those excluded were images with evidence of Neurosurgical interventions (AVM repair, shunting), known or diagnosed cases of vasculopathies such as arteritis, and known craniofacial anomalies and genetic disorders.

Of the 215 images of the circle of Willis, 80 (37.21%) were incomplete whereas 135(62.79%) were morphologically complete. In the posterior circulation, only 142 images had functional completeness, of which 86 showed textbook configuration (40% of total, and 60.56% of the complete posterior circles).

PCoA was normal in 165 (76.74%) images, on both right and left sides. The commonest variant observed was hyperplasia of right PCoA in 40 cases (18.6%) and left PCoA in 34 cases (15.81%). Hypoplasia was less frequent with four arteries affected on right and six on left side (Table 1). Total absence of PCoA and tortuosity of PCoA were also noted in ten images each respectively.

The artery was noted to be essentially normal in all the studied images. 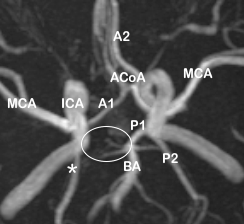 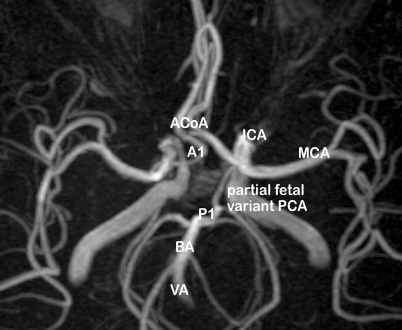 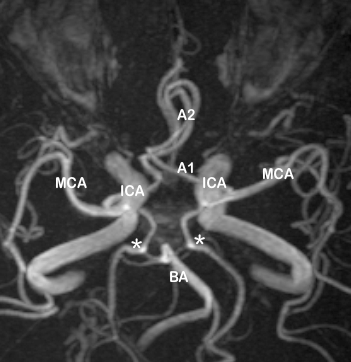 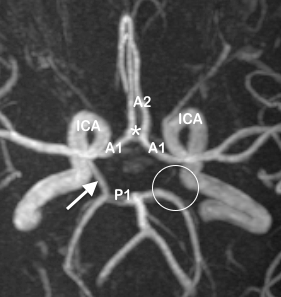 Developmentally,7, 8, 9 in the posterior part, foetal origin of PCA occurs when the embryonic posterior cerebral artery (derived from ICA) fails to regress on the right or left sides or bilaterally. Most cases of P1 segment hypoplasia is due to the abnormal regression of the anastomosis between the primitive basilar artery and primitive PCA.

Clinically, the presence of variations in the posterior part can compromise vascular blood flow before or after transition from ICA to vertebro-basilar system can impair normal development of cerebellar hemispheres (as seen in PHACE syndrome). Moreover, variations in the posterior circulation are associated with a higher incidence of migraine and posterior cerebral infarcts with an associated increased stroke risk in patients with obstructive arterial disease.10 Hypoplasia or absence of PCoA is a risk factor for the occurrence of ipsilateral watershed infarction.