Bamne and Gayathri: A study on morphometric dimensions of tibial condyles in Indian population

A study on morphometric dimensions of tibial condyles in Indian population

Background and Aim: Knee joint is the largest and complex joint in the body which helps in weight bearing and locomotion. It is subjected to degenerative changes like osteoarthritis, Knee injuries and trauma. Present study is proposed to access measurements of upper end of tibia. These morphometric parameters can be useful to guide the treatment in procedures of unicompartmental knee arthroplasty and total knee arthroplasty.

Conclusion: Results of this study will be helpful for orthopedicians to design appropriate size of knee prosthesis in knee arthroplasty also useful for forensic experts, anthropologist and anatomist.

Knee joint is the largest joint in the human body. It is a compound synovial joint, performs a significant role in adjusting the centre of body mass and posture which requires a great range of movements in three dimensions together with the capability to bear high forces.1

Knee joint is a modified hinge joint, composing of tibofemoral and patellofemoral components. The main articular surface of femur and tibia are its medial and lateral condyles in its lower and upper end respectively. The pair of tibial condyles are separated by the intercondylar eminence. The articular surface of lateral condyle is circular while medial condyle is oval. Through the tibiofemoral articulation, the upper end of tibia plays a crucial role in conducting the body weight from femur above to talus below, thus being unique in performing day to day activities and sports.2 Therefore knee joint is commonly affected by osteoarthritis which is the most common pathological disorder of knee. Osteoarthritis is usually treated by Total Knee Arthoplasty [TKA] or Unicompartmental Knee Arthoplasty3 [UKA]. In TKA precise soft tissue balancing is required along with resection of bone thickness equal to the thickness of prosthetic component implanted which helps in equal spacing for flexion & extension and permits joint stability throughout the range of motion. The success of TKA depends on the prosthetic selection, accurate sizing and proper placement. In order to sustain the flexion & extension spacing, Anteroposterior measurements [AP] of prosthetics is essential. The mediolateral measurements decide essential coverage of resected bone surface and wound closure.4 In UKA, damaged knee parts are replaced only in a single compartment.UKA is designed to cause less trauma and damage by replacing only less bone and maintaining most of the individuals own bone.5 At present UKA is a satisfying treatment for unicompartmental knee arthritis. The prosthetics are made with the measurements available from western population studies. Hardly few Indian studies are available on the anthropometric measurements of upper end of tibia. Hence this study aims to measure the dimensions of upper end of tibia which can be a useful guide for designing knee prostheses for Indians. 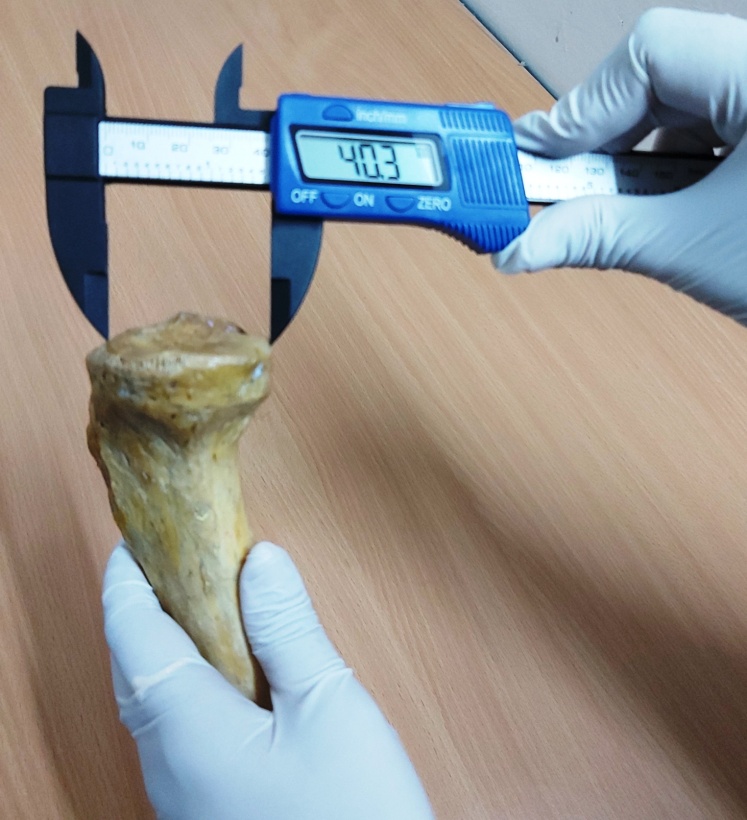 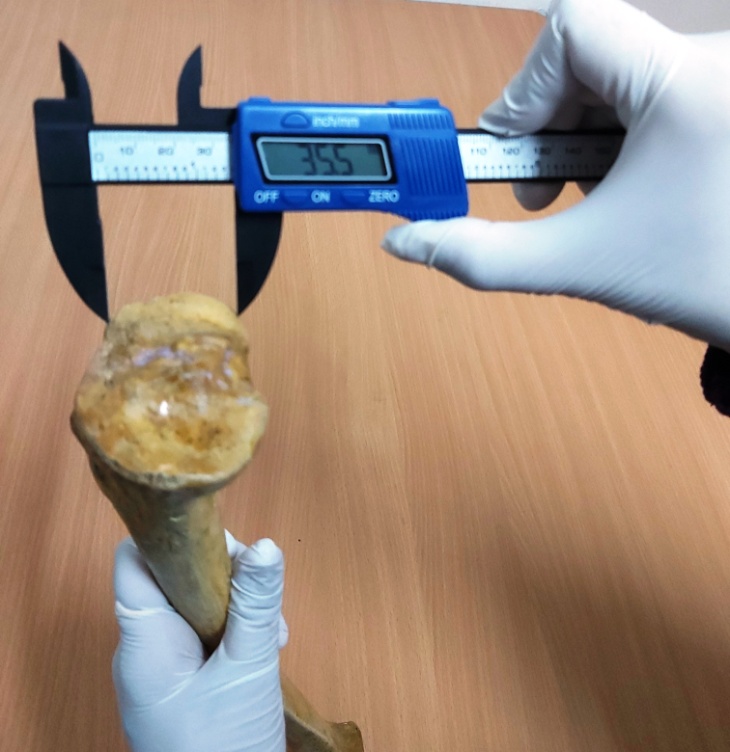 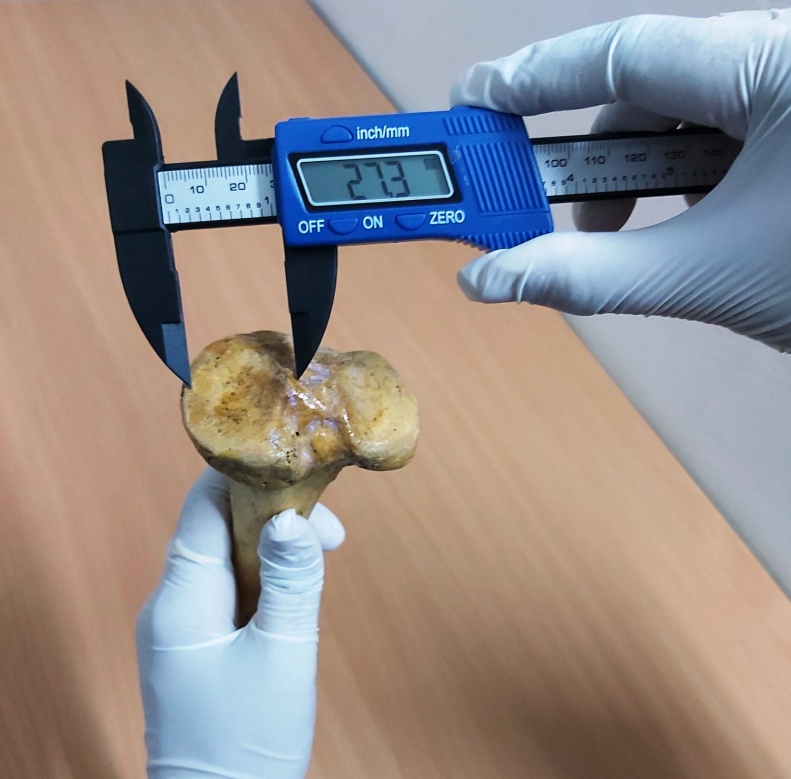 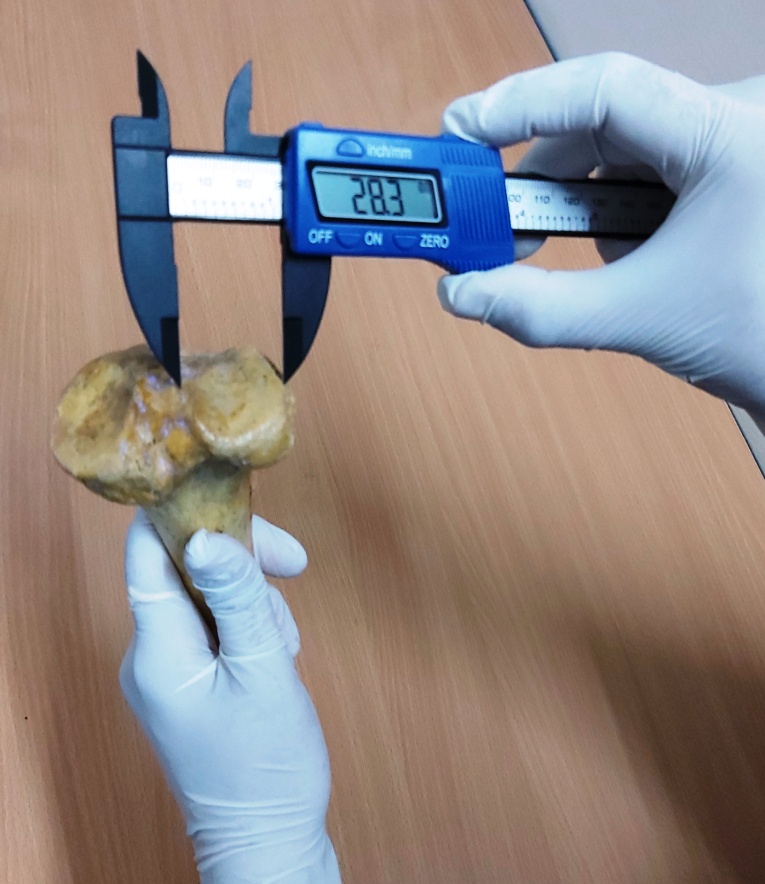 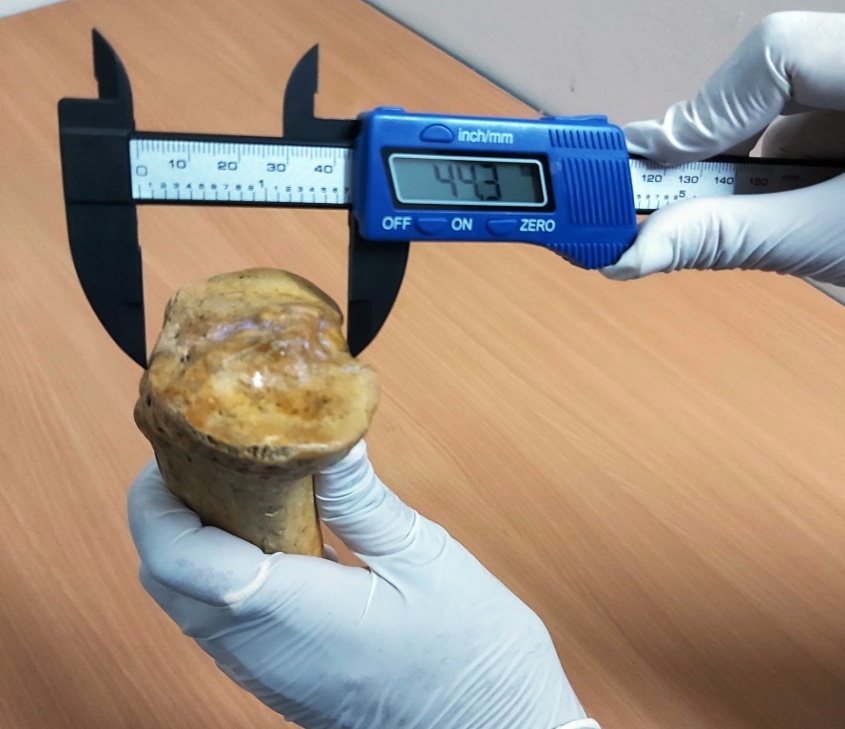 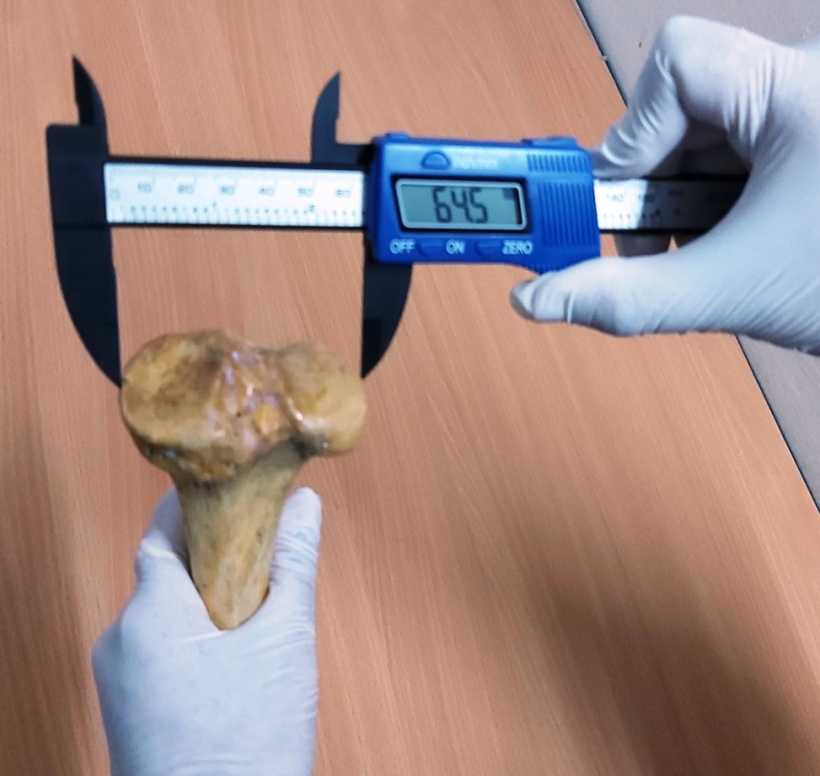 The morphometric study is conducted on 62 human dried tibiae, all measured values of different parameters are tabulated, analyzed and subjected to statistical analysis by using SPSS software (version 12.0). The results are as follows:

Measurements of parameters of tibial condyles

[i] All parameters are recorded in mm. and represented as Mean ± Standard Deviation.

Comparison of measurements between right and left tibia

[i] All parameters are recorded in mm. and represented as Mean ± Standard Deviation

From past, studies done by various authors on different populations across India and abroad it was recorded that Indians need smaller size knee prosthesis as compared to Caucasian and western population. Even though in past, many studies conducted by CT and MRI, has been reported inaccurate. So direct measurements taken from dry bones have significant advantage in designing knee prosthesis.

Tibial condylar shape gains an importance because it provides attachment to medial and lateral menisci. As per study reports, menisci occupies 55–66.7% of the corresponding tibial condyles.11 Up to 14th week of intrauterine life tibial condyles and menisci are of same size on both sides. During later stage of development the size of menisci increases. However the medial condylar area increases more rapidly because of the smaller coverage area of the medial menisci.12 So the measured parameteric values could be helpful for meniscal transplantation.13 Osteoarthrits of knee joint is very common degenerative disease in adults. It is mainly due to more mechanical stress and genetic factors.14

This study will be highly beneficial for orthopeadic surgeons for designing appropriate sizes of knee prosthesis in unicompartmental and also in total knee arthroplasty. Study is also helpful forensic experts, anthropologist and anatomist.